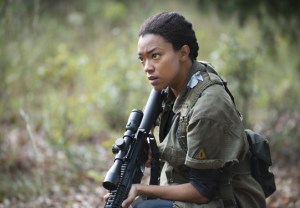 This week’s episode of The Walking Dead might as well have been titled “Honey, I’m Home!” Because just as Rick and his haggard family of survivors fought not to get too comfortable in Alexandria in “Remember,” “Forget” found (at least most of) them deciding, “I could get used to this.” Who were the holdouts? Keep reading…

TAKING PRECAUTIONS RATHER THAN CHANCES | Early on, Carol and Daryl took a secret meeting with Rick at the shack where he’d hidden the now-missing gun and agreed that they’d need firearms sooner or later, so they’d better swipe some sooner THAN later (before the Alexandrians became suspicious of them). As for the rest of their group, they were to remain unaware of the trio’s back-up plan and continue trying to assimilate. (Interesting side note: While at the shack, the threesome discovered a felled walker with a “W” carved into his forehead to indicate — I’m guessing — a kill by the “wolves” that attacked Shirewilt Estates?)

Back within the gates, Deanna made it easier and easier for our regulars to want to settle in Alexandria long-term by conjuring up visions of a thriving future community that didn’t just have houses and plumbing but also businesses and a working government (good luck with that!). In fact, it was that last goal of hers that she cited as the reason she wanted to work closely with Maggie. (As into it all as Michonne was, she still had trouble believing that their new neighbors would suddenly see her and Rick as authority figures just “because we’re wearing windbreakers.”)

While Deanna painted her pretty picture, Rick nodded and said all the right things, but really, he was more interested in discussing security. For starters, he wanted the walls patrolled 24/7. “People,” he reiterated, “are the real threat now.” After Sasha volunteered to pitch in as a clock-tower lookout — and it was revealed that the post was only manned sporadically by Deanna’s son, Spencer — Rick was horrified. Sasha, on the other hand, was like, “I’ll take lots of shifts, extra shifts, all the shifts.” In response, Deanna told the grieving sharpshooter that she’d consider making her lead lookout if she came to that evening’s welcome party for the newcomers at Casa Monroe.

THEY SHOOT HORSES, DON’T THEY? | Meanwhile, Daryl ran into Aaron hunting in the woods, and though Merle’s brother was his usual surly self at first, they wound up bonding big-time chasing after an elusive horse. Aaron said that he had tried before to rope Buttons, but to no avail. (Yes, the horse’s name was Buttons. One of the Alexandria kids had spotted the black beauty and named it.) This go-round, Daryl nearly wrangled the horse, but in the end, walkers got it and ripped its innards out. “He always ran,” sighed Aaron, clearly heartsick. “You were trying to help him,” Daryl replied. (A pretty good metaphor for the new friends’ relationship thus far.)

Later, Aaron suggested that he, Eric and Daryl had something in common: Albeit in different ways — the couple for being gay, Daryl for being the standoffish new guy with a crossbow — they were all outsiders. And since people fear what they don’t know — and “fear shrinks the brain” — Daryl should let his new neighbors get to know him. Easier said than done.

PARTY CENTRAL | Since Rick’s absence from Deanna’s party would be noticed, and since Daryl was always watched like a hawk, it was decided that Carol — “invisible” in her Desperate Housewife disguise — should be the one to steal the guns. Unfortunately, she wasn’t invisible to Jessie’s younger son, Sam, who followed her as she snuck away in hopes that she was going to make more cookies. Caught in the act, Carol warned the boy — cold, Carol! Cold! — that, if he blabbed to anyone, he would wake up one day deep in the woods tied up as zombie bait. On the other hand, if he kept his lips zipped, he’d get cookies. (Too late — if I was that kid, I’d have already wet my pants.)

Nearby, the party was in full swing. (It looked so normal, nobody would’ve blamed you if you’d thought you tuned in to the wrong show!) Rick and Deanna’s husband, Reg, formed a mutual admiration society. Glenn and Maggie refused to let Noah bail. (“You’re here with family,” she reassured their pal.) Rosita said the three magic words that Abraham needed to hear to get into the swing of things (“They have beer”). Soon, he was so tipsy that his philosophical conversation with Michonne seemed downright flirtatious. (Or was it just me who thought that?) Handsome Spencer tried — and failed — to charm Sasha. (Too soon. Dude couldn’t have known, but way too soon.) And, even after being properly introduced to Jessie’s doctor husband, Pete, Rick stole a kiss from his cute stylist — on the cheek, but still! — as she handed Judith back to him.

Eventually, all the “normal” got to be too much for Sasha. Prodded by her hostess to join in a little more, Tyreese’s sister lost it when a new neighbor asked what her favorite dish was. The nice lady was explaining that she was cooking all of the newbies’ favorite meals one by one, and she was worried that she’d make something for Sasha that she wouldn’t like. “That’s what you worry about?!?” Sasha hollered, incredulous. And with that, the party was officially pooped.

NEW BEGINNINGS | While everyone else was at the shindig, Aaron invited Daryl to join him and Eric for some “pretty serious spaghetti.” (With his broken ankle, Eric wasn’t going to the party. And since Eric wasn’t, Aaron wasn’t.) Afterwards, Aaron revealed that he had asked Deanna not to give Daryl a job. Why? Because Aaron had a job for him: Aaron didn’t want Eric risking his neck as a recruiter anymore, he wanted Daryl, who knew better how to take care of himself, to be his partner. Not only that, but Aaron just happened to have a garage full of motorcycle parts that he’d always meant to assemble… which he suspected Daryl would instinctively know how to assemble. Aaron understood that sometimes Daryl just had to get out of there, to be out there. So the offer was both practical and pretty damn thoughtful. And since “I got nothing else to do,” Daryl accepted. He even said thanks.

The next day, when Carol offered Rick and Daryl guns, the former took one, but the latter… surprisingly, he passed. “I’m good,” he said. Big moment, that. Michonne, too, turned an important corner: She hung her sword on a wall.

What did you think of the episode? Are you sorry the show doesn’t seem to be pairing Rick and Michonne? Did Carol go too far threatening Sam? Hit the comments!