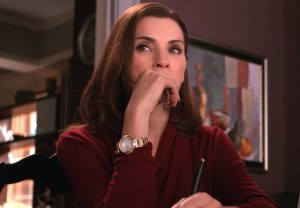 It doesn’t require a “spoiler alert” warning to say that almost nothing happens on this week’s installment of The Good Wife.

And yet, if the seeds randomly scattered over the course of the hour take root, it could be the start of everything that’s to come in the complicated, mixed-up, ethically murky life of Alicia Florrick — political candidate, power spouse, occasional trial attorney and most certainly a woman in denial about her mourning over the tragic death of her lover Will Gardner.

It’ll only take me a paragraph to recap the action in “Mind’s Eye” — an episode that takes place mostly inside Alicia’s very vivid, hypothetical-obsessed brain.

As our candidate for State’s Attorney battles laryngitis and braces for a crucial editorial-board interview (the result of which may break her current deadlock with Frank Prady), she mulls her answers to a series of very tough questions, reconsiders the state of her relationships with her children and her past/current/future lovers and also deals with Louis Canning’s wrongful eviction lawsuit against Florrick-Agos-Lockhart. Canning winds up unconscious in the hospital — not expected to live through the night – while a shocked Alicia pays a bedside visit, then begins eyeing her political handler Johnny with what appears to be slightly more than professional interest. (Or maybe she’s just really stoked to go into that board room and knock off the editorial board’s socks?) And that’s about it… sort of.

The real action happens Inside the Mind of Alicia Florrick, and sans red wine, it’s an almost impossibly fast-paced, free-association kind of place — funneled through whatever music happens to be playing in her headphones. (Anyone else find that construct absolutely real and delightful? And was anyone else utterly elated when La Florrick never succumbed to that night-time cough syrup — a twist that would’ve been too cheap?) With that in mind, I’m not going to even attempt to do a traditional recap in this post — but rather post the four most intriguing ideas/questions/developments raised in the course of the hour:

“WILL?” | As Alicia surfs the Internet, she encounters a pop-up ad for a credit-card company — and it’s Will Gardner’s voiceover asking, “What do you want in a credit card? Everything.” Our protagonist fantasizes several encounters with her deceased lover — some steamy, some quietly mournful — but all roads lead back to the fact that he’s gone — and she’s still reeling. We also see Alicia imagining: Johnny nibbling on her neck; a shirtless Finn atop her (with Johnny’s voice coming out of his mouth — “questions are for dopes”); and even Peter (with Kalinda snuggled in the bed behind him) asking “Why is it all right for you but not for me?” In the end, she says goodbye to dreamscape Will — and to reiterate, this happens while she’s sitting in the passenger seat, observing Johnny. (Does this mean no payoff with Finn? #NoMeGusta)

Alicia is a sexual, romantic woman who’s been repressed — or perhaps shut down — for quite some time now, and it’s clear that her hand grazing Finn’s as they sit side-by-side on a couch won’t be cutting it anymore. But since we haven’t really seen her fully engage in romantic discourse with any of the above fellas, it seems to me that our girl busting a big move with any of ’em might feel premature. Still, I like the idea of Alicia abandoning her sham of a marriage — how much political capital can it really be providing? and how come the press hasn’t noticed their physical distance? — at this point in her career. And yes, seeing as how she and Will had pressed pause on their sexytimes at the time of his passing, I don’t have a problem with her moving on from him, either.

THE KIDS | After Johnny reminds Alicia she might get asked about Zach taking his teenage girlfriend for an abortion, the sometimes scattered mom starts imagining her estranged son as a homeless man on a bench — asking why she’s still angry at him and (hilariously) why he’s her cautionary tale despite the fact that he’s a freshman at Georgetown. (Good point, kid!) She finally breaks down and dials his number, but he misses her call by seconds — another reminder of the missed connections we can still endure in this technologically plugged-in age. 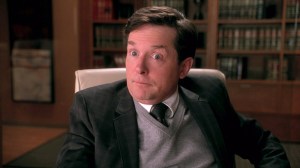 Most interestingly of all, though, Alicia’s phone begins accidentally accepting Grace’s texts — and she learns her daughter is having a crisis of religious faith. Famed atheist Richard Dawkins pops up in Alicia’s mind, wondering why she would imagine Grace pregnant and sniffing glue just because “she stopped believing in fairy tales” — and Alicia can’t quite explain her sinking feeling. After all, she doesn’t believe in God — so much so that it makes her squeamish to promise Canning’s wife she’ll pray for him — and yet the thought of her daughter’s loss of faith is upsetting. Does Alicia want Grace to walk a moral path — but is nevertheless worried that if her daughter follows in her non-believer footsteps, she’ll lack the template for being a good person?

It’s fascinating that Alicia — even knowing Grace’s current crisis — can still ask her teenage daughter to do the praying on Canning’s behalf. In this ugly, murky campaign season, somehow the daughter had become the mother’s anchor — if not to a higher power, then at least to the kind of decency and honesty to which Alicia is still trying to cling. The flip of mom-daughter dynamics — the former often needs more “guidance” than the latter — remains one of my favorite aspects of Season 6. Let’s hope it’s not another three weeks before we check in on Alicia-Grace again.

BISHOP TAKES PAC | Also exciting: Alicia debating internally whether she could/should/will reveal that her former drug-dealer client Lemond Bishop is financing her PAC (a tidbit that’s beginning to pop up in the blogosphere). In a ridiculous flight of fancy — St. Alicia knows she’s not wearing a halo, but sometimes it’s nice to imagine one — she fantasizes the editorial board lauding her bravery in admitting Bishop’s financial help. But it’s Dream World Eli who snaps her out of it — and by the end of the hour she’s assuring Johnny she’ll take the lawyerly route: Telling the board that to her knowledge, Bishop isn’t funneling money her way. After all, the criminal mastermind merely told her that’s what he was doing — she can’t be 100 percent certain he was telling the truth, can she?

THE IMPORTANCE OF BEING LIKED | I always like to believe Alicia is a good person at heart — and her decision to visit Canning on his deathbed plays this out — especially since she’s clearly not there to settle their lawsuit battle. Still, one of the questions posed by the editorial board in Alicia’s mind — “Are you acknowledging you’re not funny or likable?” — continues to drive her actions and the entire plot of the show.

Is Alicia’s inherent “goodness” a requirement for enjoying The Good Wife? Can she be a little bad and still be our hero? How about a lot bad? How about completely unethical — but only to serve the greater good? Imaginary Prady’s insistence — “Truth is just truth… sometimes, words have to mean what they say” sounds great on paper. But does Johnny have a point that truth “isn’t ‘this happened’ or ‘that happened’… the greater truth is in doing good”? Uff, my head is starting to hurt — although maybe it’s from the non-linear brain-bender I just experienced.

“Mind’s Eye” won’t rank as my favorite Good Wife episode ever — it wouldn’t make the Top 20, even — but I respect its ambition, its rawness and its unflinching avoidance of easy answers. Which is more than I can say for a lot of the shows backlogging my DVR.

As I grapple with those deep thoughts, I turn it over to you? What did you think of this week’s Good Wife? Did you love it or loathe it or fall somewhere in the middle? Sound off in the comments!