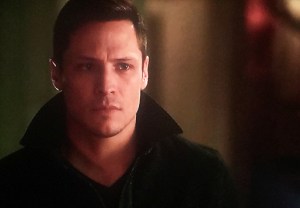 A family secret, a twisted new alliance and a long-overdue declaration of love? Oh, Revenge, how we’ve missed you.

Let’s start with that last one, shall we? After what felt like 10 seasons — but was probably less, I’m sure — Jack finally grew a pair and told Emily how he feels about her on Sunday’s episode. “I have one certainty in my life, and it’s how I feel about you,” he said in the final, heartbreaking scene. “It’s always been you.”

I call the scene heartbreaking because, unfortunately, Emily didn’t exactly give the response that Jack (or any self-respecting fan) was hoping for: “I can’t, Jack. I’m sorry.”

Allow me to react on behalf of Jack and the collective Revenge fandom when I say: Um… excuse me? First of all, apology not accepted, Emily. Second, you’re finally in a place where you can be open and honest about your feelings, and you’re choosing to pretend like you’d rather be with Ben? Ben?!

At least Jack was man enough to say he’s “not going to wait around” for Emily. She had her chance, and she totally blew it. And while we’re on the subject of this week’s epic failures…

THWARTS AND ALL | Margaux experienced yet another setback in her ill-conceived plot to take down Emily, as Team Thorne — which now includes Louise, who “plays” dumb like a pro — managed to destroy the video of Jack admitting to Kate’s murder. But just when it seemed like the media mogul (or whatever she does) was finally ready to throw in the towel, she set her sights on the other man in Emily’s life, tracking down Ben’s ex-wife. Any guess as to why he’s so determined to hide from her? 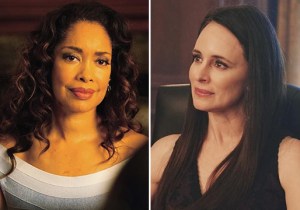 WHERE THERE’S A WILL | The death in Victoria’s family turned out to be Conrad’s father Edward — not Charlotte, as many fans had  speculated at the end of the last episode. And just when we thought we knew every last one of the Graysons’ secrets, along came this game-changer: Four months ago, Conrad’s father married Natalie — yes, that Natalie — who apparently concealed her true identity upon arriving in the Hamptons to get a genuine read on Victoria, who inherited nothing but a pair of charming (not to mention “incontinent”) corgis. With a little help from  Lyman, Victoria discovered that Natalie, who claimed to have been Edward’s caretaker before he died, had actually been stripped of her nursing license after a hospital caught her “swindling” patients out of their money. Next stop: court!

EX GAMES | While Victoria was busy forging an alliance with Lima Bean, her new nemesis was sinking her claws into the Hamptons’ most eligible psychopath, David Clarke. It started with a drink, followed by the gift of a boat from Edward’s inheritance, then a flirty chat about baseball to seal the deal. I’ve got to say, for a newcomer, Natalie knows how to play this game well.

Revenge fans, were you as crushed as Jack and I were by Emily’s rejection? What’s the deal with Ben’s ex-wife? And is my gaydar totally off with Lima Bean? Drop a comment with your thoughts and theories below.