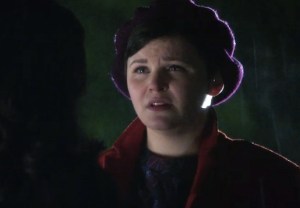 This week on ABC’s Once Upon a Time, we learned a little more about the big secret Snow and David are hiding from Emma, Regina enlisted Pinocchio in her search for the Author, Hook withheld a fish tale and Rumple got an eyeful.

So as much as I’m fearing a bit (lot?) of flashback retconning to come, I’m certainly curious about the Charmings’ secret. This week, we learned that with the Dark Curse looming, Maleficent et al urged Snow and David to trek with them to the Tree of Wisdom, of which only two valiant heroes can ask a question — such as, “How do we defeat the Dark Curse?” Alas, the only answer the Charmings got was a zap onto their royal tuchuses. Why? Because Snow White was unknowingly with child, and her baby wasn’t guaranteed to be valiant. Rather, Mal noted, a product of True Love can also have the potential for great darkness, to become a villain “darker than any realm has seen.”

Later, in private, Mal confided in Snow that they have something in common, that she is also to be a mother. Thus, they must unite to stop the Dark Curse, for their children’s sake. But do-right Snow dismisses the idea of allying with evil (“I won’t become like you”), in part because of how it’d threaten to corrupt unborn Emma.

Here and now in Storybrooke… nightmares and no sleep convinced Snow and David that they must get Cruella and Ursula “the hell out of town before anyone finds out what we did.” And that means keeping tabs on the two Queens of Darkness, such as when David and Emma tailed them after they are exited Gold’s shop. Pulling over the Panther de Ville, David finds a box the ladies stole from Belle, but hides his discovered from Emma. Later, revealing the totem to Snow, the Charmings conclude that a plan is afoot to resurrect Maleficent, and the only way to thwart it is to dispose of her remains from beneath the library. But it’s all a trap, intended to lure the Charmings to where they’d otherwise never venture, to use the blood of “those who wronged Maleficent most” to activate her resurrection — and it does. Once Mal roars back to life, Snow contends that she doesn’t know the whole story behind what happened long ago, but the sorceress counters that all she cares about is the Charmings’ pain, and that it be as “long and terrible and unyielding as my own.”

Afterward, Snow and David resolve to come clean to Emma… but chicken out when they overhear their daughter talking to Hook about the trust she has placed in him, despite him not disclosing the nature of a past clash with Ursula — that she will do what her “parents always do” and see the best in people. Thus, when Emma wonders why Maleficent, the witch she once already slayed in a dungeon, is back and allied with Cruella and Ursula, her ‘rents lie that it’s simply because “we’re heroes and they’re villains.”

But Snow must loop in somebody, so she meets up with Regina to warn that Maleficent is back and suggest that the formerly Evil Queen 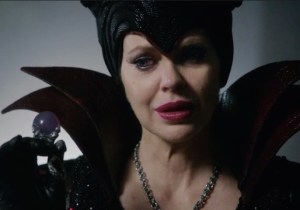 “go undercover” with the other sorceresses to see what the plan is. Regina’s iffy, so Snow reveals that Emma was born with a potential for great darkness. And that if Emma, who is finally opening her heart, were to learn this truth and be let down by her own parents, it could send her tumbling down a dark path. What’s the big secret, Regina asks, as we see Maleficent turn her “totem” into the baby rattle it once was? “Because of us,” Snow admits, “Maleficent lost her child.”

Elsewhere in the episode:
* Regina pressed young Pinocchio to remember something about the Author, but the lad comes up empty — even with future honey Emma on hand to “jog his memory.” Later, Geppetto, upon finally appreciating Regina’s plight, 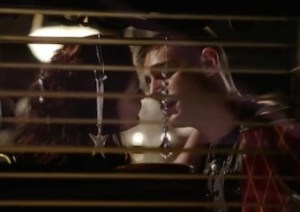 passes along the saddlebag from August’s motorcycle. At episode’s end, we see Henry discover inside it a drawing of a doorway with a Post-It saying, “Author?”
* During Snow’s closing narration and the montage that accompanied it, Rumplestiltskin smiled as he looked in on Belle from across the street… until he saw her kiss Will Scarlett. Crestfallen, Rumple slinked back into the shadows.

Following a recent screening of this episode, Once creators Adam Horowitz and Eddy Kitsis answered some questions about what’s to come, including:

HAS RUMPLE LOST BELLE FOREVER? | Horowitz notes that when Belle kicked her husband out of town, “She kind of reached her last straw, and she’s kinda moved on a bit.” As such, “[Rumple] has his work cut out for him.” That said, the spied smooch “activates him in a way, and starts him on a new quest that he’s really energized about.”

WILL EMMA GO DARK? | Kitsis posits that if/when Emma realizes “the two people she trusts most in life are lying to her,” it would be, in a word, a “bummer.” After all, “What happens when you find out that the person who was helping you grow is just as bad as the people you were trying to get away from?” One thing seems certain: Emma won’t get the bad news from her mom’s unlikely confidante. As Horowitz states, “Regina is a stronger secret keeper than Snow White.”

WHAT HAPPENED BETWEEN HOOK AND URSULA? | That backstory will be detailed next Sunday, and as the pirate intimated, it’s “far worse” than any romantic snafu, Kitsis affirms. “When you think about what would be worse than having your heart broken, I would say having your soul crushed.”

What did you think of the episode “Unforgiven”?