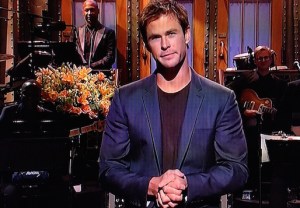 After last week’s better-than-usual Dakota Johnson-led episode, the question loomed: Could Chris Hemsworth bring the hammer down at Saturday Night Live and make it back-to-back wins for NBC’s sketch-comedy show?

Alas, it wasn’t meant to be — despite the show’s writers tackling timelier-than-usual pop-culture targets (i.e. Iggy Azalea, Empire, even a Thor-led news report).

Below are my picks for the week’s Best and Worst:

BEST: The Girl You Wish You Hadn’t Started a Conversation With at a Party
Cecily Strong’s rambling, language-mangling bubblehead was especially goofy this time around. Best zinger? “At the health fair, everyone’s talking about HMOs: How about just calling them gay people?”

BEST: Hillary Clinton
Kate McKinnon’s tense smile and unhinged ambition while attempting to look like “a relatable woman on a couch” made for one of the best cold opens in recent memory. Her email response to a friend’s invite to see a Bradley Cooper flick — plus a stellar House of Cards joke — have me hoping McKinnon’s contract has been locked in for the duration of the former Secretary of State’s inevitable run for the highest office.

WORST: Empire‘s New Character
OK, this one got more laughs than that stupid Disney Channel spoof, but it could’ve/should’ve been so, so, so much better. Kenan Thompson nailed Terrence Howard’s tremulous delivery, then was left with very little to do, but Sasheer Zamata will need to dig a lot deeper — and crazier – if she wants us to buy her as the already iconic Cookie Lyon. I was fine with the idea of plunking Hemsworth’s square paper-pusher into the Empire mix, but with so much rich source material left un-mined, the end product felt a little slapdash.

WORST: So You Think You Can Live With Brian?
Was there an actual punch line in this Kyle Mooney- and Beck Bennett-led exploration of tired reality-show tropes? I don’t doubt there are laughs to be found in spoofs of mundane unscripted series, but not this time.

THIS ALSO HAPPENED: Chicken Captain
Hemsworth got to share the stage with a hen who, to her credit, wasn’t glued to her cue-cards.

What did you think of Chris Hemsworth’s SNL hosting gig? Take out poll below, then sound off in the comments!