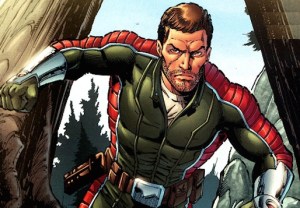 The curious spinoff project featuring characters from both Arrow and The Flash is starting to come into focus, with details on three roles to be cast.

As previously reported, the CW spinoff — which may zip past the usual pilot process and be ordered straight to series — will star Arrow‘s Brandon Routh (who plays Ray/The Atom) and Caity Lotz (formerly Sara/Canary), as well as The Flash‘s Wentworth Miller (Leonard Snart/Captain Cold) and Victor Garber (Dr. Martin Stein aka half of Firestorm).

Rounding out the ensemble, TVLine has learned, are the following “mystery” characters — though we’ve put forth out best theories on the familiar heroes/foes being cast. (With reporting by Michael Maloney)

“THE TRAVELER” | Described as a “Han Solo-esque rogue who gets by with his charm, this hero hails from the future, and has journeyed back in time on a secret mission. His razor-sharp wit hides the pain of a man who has lived through serious conflict. He also harbors many secrets, always leaving both his teammates and the audience unsure of his true allegiances.
Quite Possibly Is Rip Hunter (pictured above), who first debuted in 1959 in the pages of DC Comics’ series Showcase and has popped up in continuity over the years. This Time Master has revealed in the past that “Rip Hunter” isn’t his real name – it’s an alias he uses so that his enemies can’t thwart his future efforts by killing him when he is a helpless infant in the past!
But Could Also Be Booster Gold — though he appeared in an episode of Smallville (played by Days of Our Lives‘ Eric Martsolf), and it’s been said the new characters have never been featured on a live-action show before — or Time Traveler, a powerful villain who’s gone up against the Legion of Super-Heroes. 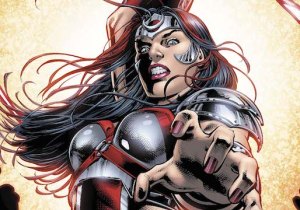 This twentysomething Latina is pretty but unassuming, book smart and socially awkward by day. But by night, when she hears the cry of battle, her fury is ignited and she becomes a fierce warrior — so much so, that sometimes she can become a threat to others.
Quite Possibly Is a cross between Fury aka Helena Kosmatos (pictured), an Amazon heroine empowered by the ancient Furies, and Yolanda Montez, who assumed the role of Wildcat from her godfather, Ted Grant.
But Could Also Be Pantha aka Rosabelle Mendez, a short-lived member of the New Titans, or Tarantula aka Catalina Marie Flores, who hails from the pages of Nightwing. 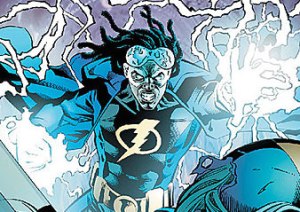 An African-American male in his twenties will fill the role of a regular, street smart guy who unexpectedly gains powers, and then, as part of the team, regularly quips about the insanity of the situations.
Quite Possibly Is Virgil Ovid Hawkins, a high school student who was splashed with experimental chemicals after being caught in a gang war. Virgil emerged with electromagnetic powers, which he uses to fight crime as the superhero Static (pictured).
But Could Also Be Black Lightning (aka Jefferson Pierce) or Black Vulcan

Carefully consider the character descriptions above and present your own “hero” theories below!