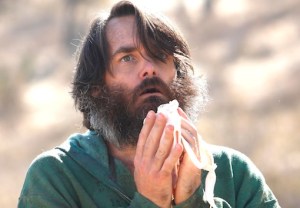 THE PERFORMER | Will Forte

THE SHOW | The Last Man on Earth

THE PERFORMANCE | Phil Miller is a slob, a hornball, a 41-year-old temp whose only interesting attribute, at the outset of Fox’s new comedy, is that he just happened to survive the apocalypse. There’s little reason to find him compelling —but we do, and that has everything to do with the man playing him. Forte makes Phil a funny, lovable schlub whose “Why not?” attitude covers a deep loneliness and longing for his old life. Forte’s performance — particularly when Kristen Schaal’s last woman on Earth showed up — was sharply funny, with the Saturday Night Live grad building an intricate comedy Jenga tower of sight gags, physical humor and dead-on line readings. The actor should pour himself a congratulatory margarita pool; his talent is the reason Last Man is alive (and well) in Tuscon.

HONORABLE MENTION | Suits‘ secretary extra- ordinaire may have declared to Harvey on Wednesday’s season finale that it’s his lucky day “because it’s the day you get to meet Donna,” but we consider ourselves the truly fortunate ones, getting to witness Sarah Rafferty‘s years-spanning performance. Whether charming her future boss (and us) in the flashbacks or breaking our hearts when she sorrowfully quit her position as his secretary, the actress was magnetic. Rafferty was so impressive and commanding, we’re not sure how Harvey can deny Donna anything she wants – and he’s a fool for trying.

Justified viewers dreaded Boyd inevitably learning that Ava’s a snitch, primarily because there was no telling how he’d react. And with Walton Goggins’ work as that scenario played out, we indeed were on edge of seat. During a “getaway” into the woods, Boyd taunted his fiancee and us, ruminating over loaded topics such as wife beaters and past betrayals. When Ava ‘fessed up, Goggins riveted us with Boyd’s torment — jabbing a finger into his temple, egging Ava to end his misery with a bullet — and, most of all, when his heart trumped his hurt: “I can get us out of this, but I gotta trust you. And I got to know that you trust me.” Boyd’s gun had blanks, but Goggins hit the bull’s-eye.

HONORABLE MENTION | Lauren Weedman typically serves as Looking‘s secret comedic weapon — tossing off deliciously biting barbs and poking fun at the relationship drama of her character’s gay pals. Sunday’s episode — in which Doris traveled back to her hometown of Modesto, Calif., to attend her father’s funeral — proved Weedman is capable of taking audiences into far heavier territory, too. Without a single line of dialogue, Weedman’s face registered palpable shock and grief and numbness as she listened to her aunt’s touching eulogy and tried to process the sudden loss of her closest family member. Later, after an unexpected car wreck shattered her wall of defenses, Doris finally called on boyfriend Malik for support, and the actress’ subsequent breakdown provided a profound dose of catharsis.

Which TV performances rocked your world this week? Sound off in the comments!