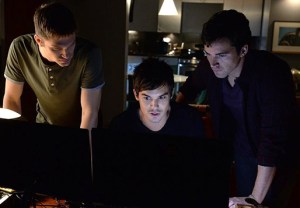 ABC Family has released the first photos from Pretty Little Liars‘ upcoming season finale (March 24, 8/7c) — and, strangely, there’s nary a liar to be seen.

As further proof that creator Marlene King intends to keep the finale, ominously titled “Welcome to the Dollhouse,” under wraps, none of the main five girls appear in this batch of first-look photos.

Instead, we see the guys — Ezra, Toby, Caleb and even Andrew — working diligently to, I assume, thwart whatever heinous plan “A” has in store for the girls. We also see Spencer’s parents confronting an unidentified gentleman, though it’s anyone’s guess as to who he is and what they want with him. (Seriously, can anybody I.D. this guy? Is it Cyrus? Noel?)

What little we do know about the finale, besides that we’ll learn the identity of “Big A,” can be found in the official episode synopsis below:

“A” has always had fun playing with Aria, Emily, Hanna and Spencer, but now “they” have the biggest game to date in store for the girls. As shocking secrets come to light and the biggest clue to the “A” mystery is revealed, is this one plAydate the Liars can survive?

Browse photos from the season finale below, then drop a comment: Who do you think is behind all this mAdness in Rosewood?