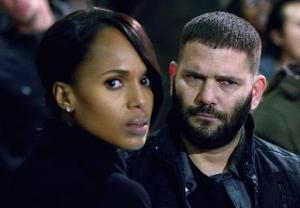 There is no rest for the weary, recently kidnapped Gladiator, ABC’s Scandal assured us this Thursday night.

In the first episode since she was rescued from Iranian clutches by onetime OPA member Stephen, Olivia — right after fibbing to a touchy-feely Jake that she was heading off to bed — got pulled into an increasingly intense, volatile situation.

Brandon Parker, a 17-year-old African-American, was shot dead by a cop after being suspected of shoplifting and allegedly reaching for a knife when confronted. The DCPD called in Olivia to manage the optics of the situation, which she was just barely starting to do when Brandon’s father, Clarence (guest star Courtney B. Vance), showed up with a shotgun, standing over his son’s body demanding justice.

Olivia promised Clarence that no less than the Attorney General of the United States himself would oversee a proper investigation into the shooting, but David waved off Olivia’s phone call, busy as he was working with Fitz and Cyrus to transition vice presidents. Also making matters worse for Liv was a community activist’s interjection of himself into the situation. He called out Olivia on her conflicting allegiances, her role in getting a Republican president elected twice, and posing as a “down ass” black woman when, as he made clear, “Your black card’s not getting validated today.”

In a quiet moment with Clarence, Olivia listens intently as he details the lengths to which he went to save Brandon from being seen as a “thug” — yet all it got him was a dead kid on the cold street. Despite his rightful stance, he acknowledged, “This only ends one way — with me dead, or locked up.” But then Olivia locked horns with the DCPD chief, who was preparing his team with riot gear and tear gas, prompting her to resign as their “fixer” and cross to the other side of the barricade.

Olivia learns that there is security camera footage of the shooting, but the cops are sitting on it, so she leans on David to serve a subpoena. He lends a compassionate ear as an exhausted Liv admits, “I have no tricks in my bag!” Reflecting on her abduction, she shares, “I thought I was going to die, I thought I was a goner. I was living in complete and total fear. Imagine living every day of your life like that? Having deftly made a connection to the racial situation at hand, Olivia gets her subpoena, gets the video and shows it to Clarence, then says they need to check for a knife under Brandon’s body, to corroborate the cops’ story. Sure enough, there is a knife — though an angry Clarence insists his son never carried one. As Dad holds his ground more staunchly than ever, Liv walks away, trembling.

Quinn eventually notices in the video that there was someone in the back of the shooter cop’s patrol car, someone who had a knife. Confronted by his chief as well as David Rosen about the frame job/cover-up, the cop directs at Olivia a screed about how “you people” are raised to see cops as the enemy, and yet he stills risks his life to walk a beat. That dozens of murders are blacks turning on one another, “yet I’m the animal.” As said shooter lands behind bars, Olivia visits Clarence with what Brandon was really reaching for before getting shot — the receipt for the phone he’d just bought. She then brings him to meet the president, who of course also lost a young son, and on whose shoulder a broken-down Clarence sobs. 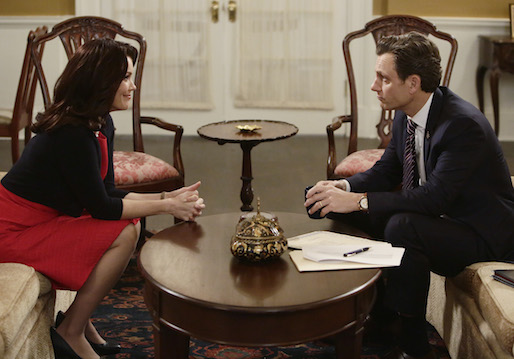 heavy, timely stuff was a lighter B-story about Fitz’s choice of a replacement VP — the thing being that Cyrus wants to support the “bold” administration that Fitz promised voters during the second election, while Fitz wants an utterly lame duck who won’t stand in the way of Mellie running to succeed her husband in the Oval Office. [Must suppress rolling of eyes….] Amidst the shooting drama, Cyrus’ attention is grabbed by the female, minority, Republican governor of New Mexico — but her vetting is leaked to the press, triggering the premature yet nonetheless damning digging up of dirt. When Mellie insists to Fitz that she didn’t leak the name, he tells her that he did, because he know s the promise her made to her.

Still, there’s the matter of finding an unelectable VP for the time being — and Mellie knows just the person: Susan Ross, the milquetoast Virginia senator that Olivia a while ago got voted into office.

What did you think of this week’s episode, “The Lawn Chair”?