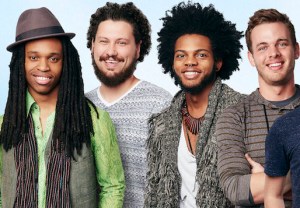 American Idol is about to back that thing up.

TVLine has learned exclusively that next Wednesday’s Top 12 performance telecast (8/7c on Fox) will find the remaining Season 14 hopefuls revisiting their audition songs as they fight for a spot in a special Thursday sing-off.

Here’s how the next couple weeks will play out in the House That Made Katharine McPhee an Unlikely TV Star:

On Wednesday, March 11, Ryan Seacrest will reveal the five guys and five women who advanced from this week’s Top 16 performances based on the public vote. Judges Harry Connick Jr., Jennifer Lopez and Keith Urban will then name two Wild Cards to round out the roster of finalists.

That lucky dozen will immediately reprise the songs* that scored them Golden Tickets to Hollywood — only this time in an effort to win over America. (*In rare instances — such as Caleb Johnson’s Season 13 “Back to the Start” performance — contestants may wind up selecting a second audition ditty that they performed in front of the judges — one that did not air during their initial on-camera appareances.)

Thursday’s telecast (March 12) will see one contestant sent to the guillotine — with the remaining 11 finalists once again performing for the public’s fancy.

The following Thursday, March 19 — the first of Idol‘s new once-per-week schedule — will result in one more elimination (along with another set of contestant performances).

Then, beginning March 25 (the week after Empire concludes its freshman run), Idol will air on a Wednesday-only basis — combining performance show and elimination.

As a refresher, here’s what the remaining eight guys and twelve women (four of whom will be eliminated by 9pm ET) covered for their auditions:

Excited for an encore presentation of the Season 14 auditions? Any theme weeks you want to see between now and May? Sound off in the comments!