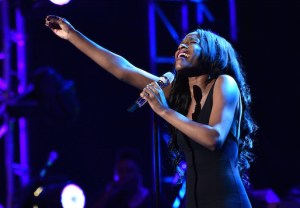 I could tell you that American Idol giveth and American Idol taketh away, but then I’d have to immediately link to a GIF of Kathy Bates in American Horror Story: Coven screaming “Liiiiiiiiiiiiies.” (Go ‘head, click it — you can thank me down in the comments.)

Nope, if we don’t like the voting results inside The House That Is Trying to Evict Caleb Johnson, we have no one to blame but ourselves.

And don’t even try to point a finger at teenage girls or desperate housewives or balding, bespectacled gay guys who tear up every time they play Fantasia’s performance-night finale rendition of “I Believe” on YouTube. 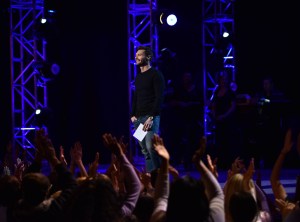 Exec producers Per Blankens and Trish Kinane have made it oh-so-easy to vote nowadays. You don’t need to dial an 866-number over and over and over again to make your opinions heard. If you can use Google — and if you can’t use Google, how in the name of all that’s holy did you manage to get on the Internet and read this recap? — you can throw up to 20 votes at any/all of Season 14’s hopefuls in less time than it takes Harry to reiterate the definition of “intonation.”

All of this is my roundabout way of apologizing to exiting semifinalist Katherine Winston. Sure, her rendition of “Safe and Sound” last week evoked all the confidence of a newborn guppy in a tank of Piranhas. But I should’ve thrown five or ten votes her way based on previous performances/future potential alone. And maybe you should have, too?

Katherine’s ouster may not be a “Wait, Chris Daughtry is going home?!” kind of shocker, but it’s nevertheless a blunt-force blow to our collective noggins — a reminder that Idol is only as good as we make it.

On that note, let’s get to the ugly business of revealing which four women got booted this week — and were not allowed to git down one last time in Detroit for America’s votes:

And now, a rundown of the Top 8 ladies — with grades and five-word performance reviews (which I’ll flesh out with more detail in the next 60 minutes, so do check back): 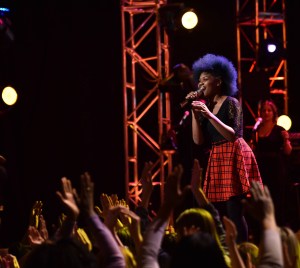 Tyanna Jones — Bobby Day/Michael Jackson’s “Rockin’ Robin” — Grade: B+ | Human equivalent of “spring forward!” Yeah, OK, the lightning-quick wordplay and range-y upper register left Tyanna sounding a wee bit wobbly on some of the song’s longer notes, but rare is the Idol young’un with this much vocal horsepower and outsized stage presence.

Loren Lott – Michael Jackson’s “I Wanna Be Where You Are” — Grade: C | Unexpected song choice — questionable technique. In other words, while I wanted to love Loren simply for choosing one of the few Motown tracks this week that hasn’t been covered half a dozen times or more, her pitch wandered like an overtired toddler dropped in the middle of a toy store. Plus, the shrill quality of Loren’s upper register was in full and wince-inducing effect again this week.

Maddie Walker — The Jackson 5’s “I’ll Be There” — Grade: B- | Don’t get it twisted: Maddie’s vocal tone is as textured and pretty as her  ombre hair. That said, I wish I’d heard more emotional oomph — and fewer nerves – in her delivery. And it wouldn’t have hurt for Maddie to have pushed the Motown jam in a twangier direction — the better to differentiate herself from her competition. Here’s hoping she gets one more week to do just that. 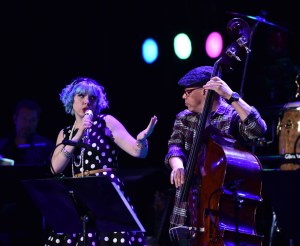 Joey Cook — The Miracles’ “Shop Around” — Grade: B- | Affected or adorable? The jury’s still out — though Joey’s visible trembling throughout much of the performance probably didn’t help her vocal tone (especially on the big notes). That said, I couldn’t have envisioned any other Season 14 chica cooking up such a jazzy, bass-heavy arrangement — and considering the end result was mostly quite pleasant, I’d be kinda bummed if she wasn’t around to quirk up the Top 12 for at least a week or two.

Sarina Joi-Crowe — The Miracles’ “You’ve Really Got A Hold On Me” — Grade: A- | How come female contestants get so little credit for fresh, daring arrangements — like Sarina’s sparse, guitar-only slow-burn on The Miracles’ boppy hit? And why was Harry coming after her about intonation when she hit damn near every note, when he gave free passes to two or three male contestants (especially Daniel!) on Wednesday? Actually, who cares? Anyone with functional ears knows Sarina’s “You’ve Really Got A Hold On Me” was what Mariah might’ve dubbed a “moment-monent” — delivered with a deft mix of unrequited longing and blind devotion.

Adanna Duru — Lionel Richie’s “Hello” — Grade: B+ | Cheesy, but deliciously so, no? And regardless of whether you were throwing a Gospel hand or throwing a side-eye during Adanna’s dramatic “I love you” whisperings/”feelin’ it!” facial expressions, you’ve got to admit this is the best she’s ever sounded. Yeah, she lost a little breath control in that final set of runs, but at least this underdog threw down — and mostly succeeded. I’d have easily swapped Adanna out for Katherine at the start of the night — but by the end, she was on my “Must Have” list for the Top 12. Well-played, gurrrl! 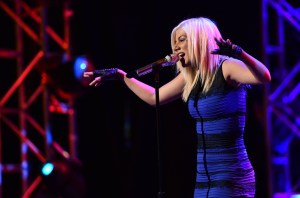 Jax — Marvin Gaye & Tammi Terrell’s “Ain’t No Mountain High Enough” — Grade: B | Jax definitely knows how this game is played — as evidenced not only by her choice of The (Blue and Black) Dress That Broke the Internet but also by the fact that she is marking her territory as Season 14’s most inventive song arranger. I agreed with J.Lo that the bass-heavy reimagining of “Ain’t No Mountain” was slightly off-putting — it conjured up visions of Audrey Hepburn boogying in a mod outfit rather than any depth of romantic feeling — but at least it was never dull or predictable.

Alexis Gomez — The Four Tops’ “I Can’t Help Myself (Sugar Pie Honey Bunch)” — Grade: D | Alexis left the sugar-pie out in the rain/ I don’t think that I can take it/ ‘Cause her pitch she could not fake it/ And I never want to hear this track again/ Oh noooooooo….

Your turn. Who’d you love from the Top 8 ladies? Who should be and who will be at risk? Take our poll below, then sound off in the comments!