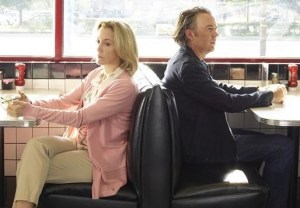 There are some TV shows that have an innate ability to let us put aside our troubles, at least for one precious hour.

American Crime is not one of those shows.

On the contrary, the ABC drama — which was created and executive-produced by Academy Award winner John Ridley (12 Years a Slave) — tackles a number of heavy topics (murder, drugs and racial profiling, just to name a few) that have all been particularly prevalent in real-life headlines.

That invites the question: Will American Crime‘s timeliness turn viewers away, or pull them in? Before we get your answer to that query, let’s briefly go over the highlights of Thursday’s premiere.

Though American Crime‘s first hour is divided among three disparate relationships, each of them are connected by one mystery: the death of Matt Skokie, son of divorced couple Russ (Timothy Hutton, Leverage) and Barb (Felicity Huffman, Desperate Housewives).

As the police in Modesto, Calif. attempt to solve Matt’s murder (and the sexual assault of his wife, Gwen), we’re introduced to a few different players who may have been involved in the crime — but one of these things is not like the other. Although three of the suspects have a history of theft and drug abuse, the fourth — mild-mannered Hispanic teenager Tony Gutierrez — seems like he was simply in the wrong place at the wrong time, leading to his questionable arrest for Matt’s murder.

Then again, even the most innocent characters on American Crime have their secrets. Case in point: Matt was a drug dealer with highly dangerous business relationships, and Russ has a gambling addiction that ultimately ruined his marriage to Barb. (Though Barb does refer to all Hispanics as “illegals,” so she’s no snowflake either.)

As the episode goes on, it gets harder and harder to see the events of American Crime in black and white. Can you root for any of the characters? Should you? And, the most important question of all: Will you keep watching?

Grade the American Crime series premiere in our poll below, then hit the comments to back up your choice.