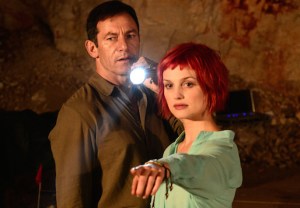 USA Network on Thursday night started its DIG, a 10-part event series in the vein of The Da Vinci Code. Will you continue along on this religiously tinged murder mystery?

DIG stars Jason Isaacs (Awake) as Peter Connelly, an FBI agent who in the midst of a jurisdictional battle with the local police in Jerusalem crosses paths with a young woman who, we eventually learn, is the spitting image of his dead daughter. When Peter again bumps into the redheaded beauty, Emma, they get to talking and then (Earmuffs, kids!) spelunking, at the dig site where she’s interning, almost directly beneath the Temple Mount.

After a bit of skinny dipping in a sacred-ish pool — a folly revisited as a bit icky with our later realization of who Emma looks like! — the pair spy on a group of Jews performing a ritualistic animal slaughter in the forbidden, sacred area of the dig site. The next morning, Emma has been found dead.

Elsewhere, in Norway, the episode opened with the birth of a rare red heifer at a remote farm. A young Hasid is put in charge of minding the calf until a later time, it’s safekeeping being of conspicuous importance.

Back in Jerusalem, Peter stupidly conceals his encounter with murder vic Emma, even knowing that there is a grainy security cam grab of them together that is sure to be enhanced (as they say). Peter disobeys 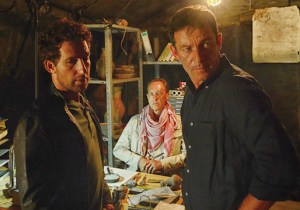 boss lady/sometime hook-up Lynn (Anne Heche) and joins frenemy/Israel Police Detective Cohen (Ori Pfeffer) on the murder investigation. Peter finds (and secretly, stupidly pockets) a cryptic journal in Emma’s apartment, while Cohen has a private agenda of his own, consulting with his rabbi uncle on a breastplate that fugitive Yussef Khaled had stolen. The rabbi is taken aback by the find, as it is ancient and intended to be worn by a high priest when communicating with God, though 12 inlaid jewels are missing from it.

Meanwhile in New Mexico, soon-to-be bar mitzvah boy Josh is being raised in a strange, sterile compound, tended to by compassionate Debbie (Six Feet Under‘s Lauren Ambrose), who in turn is watched over by sour-faced Fay and religious author Ted Billingham (Suits‘ David Costabile). Curious about the outside world, Josh uses Debbie’s key code to leave the premises and begin exploring the desert outside. After a firm scolding, Debbie “finds” Josh in another room within the complex, though it’s clear something is “off” about this particular boy. Outside, meanwhile, Fay tracks down the real Josh and, since his feet have touched and been “soiled” by the ground, she shoots him dead.

Toward episode’s end, Peter is escorting Khaled to the airport for extradition when their transport is Michael Vaughn’d. Peter amazingly emerges from the wreckage spry enough to launch into a rigorous, prolonged foot chase after the getaway car — but when he finally shoots it down, no one is inside. Realizing he’s outside Emma’s apartment, Peter goes inside, only to have Khaled get the drop on him. The fugitive, though, doesn’t kill Peter but instead vanishes, after taking the red, Hebrew-inscribed jewel that Emma had slipped into Peter’s pocket the night before. The Israel Police then show up, with Peter prepared to surrender.

All told, multiple storyline crumbs were ‎scattered in this opening hour, thought anyone not familiar with the tenth red heiefer propechy — if that is where this is heading, portending the coming of a Messiah — is probably hard pressed to care that much about what’s going on. The second episode doesn’t connect many dots either, even with regard to this “other” Josh.

All that said: Will you continue tracking this mystery?