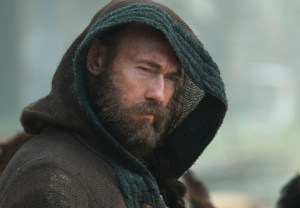 It was, literally, a dream come true on History’s Vikings (Thursdays, 10/9c) when the mystery man that Queen Aslaug, Siggy and Helga each saw during their sleep set foot in Kattegatt, his dripping blood smoldering in the snow.

What effect might this Wanderer, Harbard, have on the women while Ragnar, Rollo and Floki are off fighting? (While the proverbial cats are away, will the mice play…?) Kevin Durand (The Strain, Lost) previewed his visit to Kattegat and its lasting reverberations.

TVLINE | Recount for us the circumstances under which we first barely met your character.
Well, when most of the Vikings are off raiding and pillaging in France, I basically wander into this town and enchant most of the female characters — except for Siggy (played by Jessalyn Gilsig), who’s pretty skeptical of my intentions.

TVLINE | Is that because the women have dreamt of this guy? Is that why Siggy is skeptical?
They had dreams and then I’d kind of walk in and do some pretty epic things and take [Aslaug’s son] Ivar’s pain away, so they’re like, “What the heck, is this guy for real?” It’s kind of like a really nice big meal of a character that I get play. 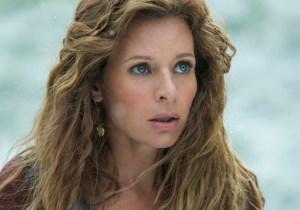 [Series creator] Michael [Hirst] put it all down on the page and when I read it I was like, “Absolutely, man. I’d love to come and do that.”

TVLINE | And filming in Ireland no less.
In Ireland, and also on a show that I’m a fan of, which makes it actually a little bit more nerve-wracking.

TVLINE | It’d be like being a young fan of the Yankees, and all of a sudden they say, “Hey, could you play second base?”
Exactly. Like, I was a big Sons of Anarchy fan and then I started working for FX [on The Strain] and my wife is like, “Wow, you should tell them you want to come and guest star,” and I was like, “I don’t want to go on there. I want to stay a fan.” And then Michael came up with this part and I was like, “There’s no way that I can’t do this, because he wrote such beautiful words and such an interesting fellow to play.”

TVLINE | Is it perhaps no coincidence that Harbard has shown up while the men are away?
Well, maybe…. That’s the funny thing about this character and doing interviews. It’s like, “OK, well, I can’t really comment on much. I’m the mysterious Wanderer and it seems like I have healing properties and I tell a lot of stories. Have a good day.”

TVLINE | Is the character as mysterious as you need to be during interviews?
I think he’s definitely way more mysterious than I am in the interviews. Because even at this point, even in conversations with Michael, there are hints as to who he might be. While playing him, I’ve read a lot about Rasputin, because of “the mysterious wanderer coming into town and healing a powerful woman’s child,” so there are a lot of things to connect there. And there are a couple of other historical figures that I researched as well that I can’t mention, because… I’ll meddle everything up. But he’s definitely the kind of the guy that’s going to have a lot of people guessing.

TVLINE | Does he have distinct dynamics with Helga (Maude Hirst), Siggy and Aslaug (Alyssa Sutherland)? When he first arrives, Helga seems almost a bit taken by him.
Well, she had just seen me in her dreams, and here I am wandering into town. So, she’s like, “Is there something wrong with my head?” So, yeah, there’s definitely a connection with these women in that they’re definitely enchanted. 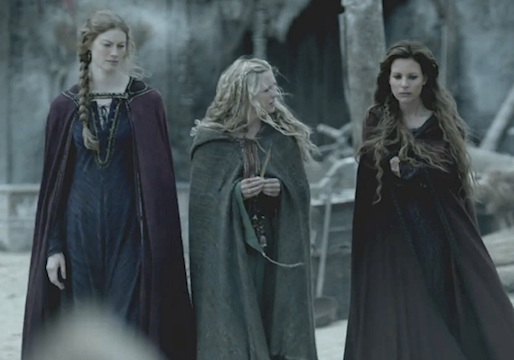 But Siggy somehow is really skeptical about me, and it’s interesting to see how that all plays out.

TVLINE | Without revealing too much, do you get to interact with any of the main male characters?
We don’t have any direct interaction, but because of my actions, especially in Episode 4, he definitely leaves his mark, and the men definitely all feel it. As time will tell, you’ll see that his actions reverberate for a long time to come.

TVLINE | As an actor, do you consider yourself a “wanderer” of sorts?
I kind of am a wanderer, aren’t I? I kind of like show up in many, many different places. So I’m a very lucky wanderer. I’m definitely a journeyman — and hopefully those journeys have made me wiser and I have many stories to tell. So, there you go.

TVLINE | Lastly, how is Season 2 of The Strain shaping up?
Right now we’re shooting Episodes 6 and 7, and I just got scripts for 8 and 9, so it’s just rolling along. It’s taking off from where we left off and it just keeps growing in scope. We’re having a ball over here.

TVLINE | The Strain is some twisted, dark stuff. It’s a lot of fun, too.
Oh, good. Thank you. Yeah, I kind of lucked out to get to play in these universes!