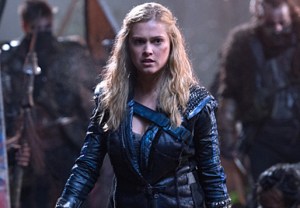 The drums of war finally sounded Wednesday during the first half of The 100‘s season finale, but by the end of the penultimate hour, it was clear that not everyone on Team Clarke was marching to the same beat.

The (initial) plan was simple: Clarke’s faction would launch an all-out assault on the front of Mount Weather — but don’t call it a slaughter, because remember: this is a “rescue mission”! — while Indra’s crew would infiltrate the structure via the underground tunnels in order to free the prisoners.

Of course, this is The 100, so “simple” is never actually an option… and apparently, neither is loyalty. The moment Lexa was presented with the opportunity to save her people — Ark prisoners be damned — she jumped at it, like it was Clarke’s mouth or something.

The look on Clarke’s face as the sting of Lexa’s betrayal set in was absolutely heartbreaking, made even more painful by Lexa’s attempt to justify her actions: “The duty to my protect my people comes first.” She even told Clarke, “We’ll meet again,” which is the traitorous Grounder equivalent of saying, “We’ll still be friends” after a breakup.

(I’m pretty sure I speak for Clarke, and all the angry viewers watching from home, when I say, “Lexa, please meet a fiery death. ASAP.”)

TUNNEL VISION | Octavia and Indra’s relationship also took a pretty serious hit this week. Though they began the hour on good terms — Indra even gave Octavia a big “You’re one of us” speech — the events of the episode’s final moments left their partnership fractured, perhaps beyond repair. Following Lexa’s shady deal with the Mountain Men, the Grounders called for a retreat, which Octavia wanted to ignore until after they’d saved the prisoners. Furious with Octavia for seemingly turning on the Grounders, she rescinded her earlier praises, going so far as to say, “You are no longer my second.”

THAT’S SO RAVEN (AND WICK) | Fortunately, not every relationship turned sour this week. The task of blowing up the dams, thereby unlocking the front gate to Mount Weather, fell to Raven and Wick, whose personal bickering was far more savage than the war brewing just outside. (“I liked you better before we had sex,” she told him.) But following a massive explosion, which nearly killed them both, Raven and Wick changed their tunes; the ever-stubborn Raven even showed her soft side, telling him, “Please don’t leave me.”

FATHER KNOWS BEST | Cage plotted to turn the prisoners against each other in an attempt to thwart their rebellion, and when that failed, he did what all spoiled idiots who have no business running an evil fortress do: He tucked his tail between his legs and ran to daddy for help. After putting Cage in his place — artfully so, I might add — Dante proposed the offer to Lexa, which she gobbled up like the treacherous turkey she is. But Dante urged Cage not to celebrate too soon; as long as Clarke and her people walk the ground, the war is hardly over.

Fellow earthlings, were you crushed by Lexa’s betrayal? And are you hopeful for next Wednesday’s finale? Drop a comment with your thoughts and theories below.