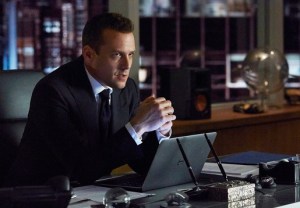 Wednesday’s Season 4 finale of Suits was certainly a rollercoaster ride for fans of Harvey and Donna as he failed to return her affections in the way she wanted, despite his dropping the L-word in the previous episode.

Realizing that Harvey was never going to come around, Donna declared that their arrangement wasn’t working for her anymore and that she’ll now be Louis’ secretary instead. But will the headstrong lawyer just let her go?

Below, executive producer Aaron Korsh previews Harvey’s reaction to Donna’s move, breaks down their feelings for each other and offers some insight on how to read her parting kiss-off — or is it?

The EP also weighs in on another pair’s big step forward: Mike’s proposal to Rachel.

TVLINE | Let’s just put it all out on table: Does Harvey love Donna, but he’s not in love with her?
What I like about our actors is they bring so much to the playing of each scene. And I also like that the audience brings a lot… I believe that in Harvey’s mind, he obviously loves Donna. That’s clear as a bell in terms of his affection for her and his bond with her. And he also, at times, can be attracted to her, obviously. But I don’t think that he thinks she is The One for him. Now, he could be wrong. I’m not saying he’s right. But I don’t think that at this time in his life, Harvey thinks Donna is The One for him. And that could be the result of any number of reasons. It could be that he’s got some kind of emotional block, which is a result of his past. It could just be that he’s an idiot and doesn’t see what’s right in front of him. I suppose it’s possible that he’s just correct that ultimately they would not work well together. [Laughs] But clearly, he cares about her as much, or more than, anybody else in his life. That’s absolutely true.

TVLINE | When she asks him, “Love me how?,” is he hesitating because he doesn’t know or because he doesn’t want to hurt her feelings and say, “Not in a romantic sense?”
You could make the argument either way. To me, he doesn’t want to hurt her feelings. When he said, “You know I love you,” she just basically said, “Why don’t you sleep over? I want to sleep with you. I want to be in a relationship with you.” And he said, “No.” She said, “Why?” And he says, “You know why. I don’t want to be in a relationship with you right now.” And then like an idiot, instead of walking out… he says something to try to make it feel better — “You know I love you.” It’s just so dumb. [Laughs] So now she’s confronting him and telling him that he did that. Now when she says, “Love me how?,” he’s just doesn’t know what to say because he’s not used to treading in this type of water. He doesn’t want to f—k up again.

TVLINE | The other line in that scene that was so telling was Donna’s, “You have everything,” which implies that she wants something more, that she’s missing something. Does she want a relationship with Harvey, or does she just want him to be honest?
She’s pointing out the fact that he’s calling the shots. She dedicates her life to him. It’s just a very difficult situation, and she’s frustrated. If you ask me, yes, she wants a relationship with him. If he really, truly doesn’t want a relationship with her, then she would accept it, but… he won’t even talk about it with her. So that’s very, very frustrating for her. She says what she definitely doesn’t want is his pity.

TVLINE | When she walks away from him at the end, her last words to him are, “I love you, Harvey,” which are almost the same words he said to her last week. Is that as much of a kiss-off as it is a declaration?
I wrote the scene, and I don’t know why, I just put it in. I had no idea. I showed it to other writers in the room, and I didn’t know what their reaction was going to be to it because I didn’t even know what my reaction was going to be to it. We all thought, “Let’s just hear how it plays. We can always cut that line.” Then I think [NBCU Cable Entertainment President and CCO] Jeff Wachtel read it and had big questions about it. “What does it mean?” [Laughs] I said the same thing to him, “Let’s see how it plays. If nobody likes it, we’ll cut it.”

In my head, when it was originally written, I thought she was maybe going to read it as a “f—k you” to him. And then Gabriel [Macht] and Sarah [Rafferty] had takes on it. I think Gabriel’s opinion was if she gives it to Harvey as a “f—k you,” that it makes her weak. I said, “I don’t disagree with that. But I also think it makes her human.” But she ended up reading it, in my mind, as… His “You know I love you” was a little bit out of pity and discomfort and trying to make her feel better. Hers seemed like she took the high road, like it really was, “Harvey, I’m doing this because, for once, I need to look after me instead of you. But I do love you.” Like it really was meant to be kind.

TVLINE | Is Harvey just going to accept Donna working for Louis? Will he try to win her back to his desk? 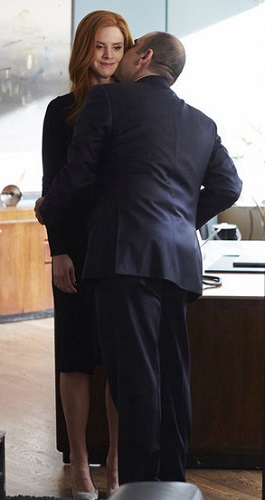 I’ll let you think about what Harvey Specter is going to do when something that he doesn’t like has happened. We definitely deal with the ramifications of her leaving on everyone. This is such a tight-knit group that something like this is going to affect the entire firm as we know it in the form of our six [characters]… Harvey is going to go through a full range of both emotions and actions regarding this thing.

TVLINE | Can Donna and Louis mix friendship and business?
Obviously, between Harvey and Louis there might be a little bit of tension, and at some point, Donna’s going to be forced to choose — probably more than once — between Harvey and Louis again. Harvey might come to her and say, “I need your help,” when he’s battling with Louis over something, and she’s going to have to decide who she’s loyal to. I think she’s going to have pick Louis because the first time she doesn’t, it’s going to be over, knowing Louis. So she’s put herself in a position that she didn’t think through. And then Louis, from his point of view, has gotten what he’s always wanted — both Donna and something over Harvey. The thing about Louis is, the second he gets what he wants, he figures out a way to start f—king shooting himself in the foot — or at a minimum, he wants more, which is probably the first step to shooting yourself in the foot. Or he’s petrified to lose what he has. All of that is the answer to: Can Donna and Louis work together? They have a lot of challenges ahead of them.

TVLINE | Elsewhere, Mike and Rachel got engaged. Is this their happy ending? Or are there more challenges ahead for them? 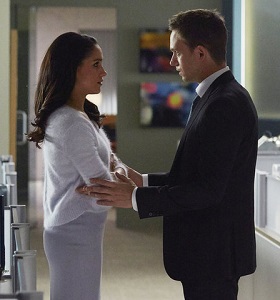 It is Suits, and it is television. This isn’t necessarily their happy ending. They had a rough year. We tried to have them have a lot of sweetness and being nice to each other in the last six [episodes], because they had such a rocky road. The proposal is a little bit, to me, out of nowhere, but it’s not 100 percent out of nowhere because Mike has a very, very strong history of doing very impulsive things. We thought, “Why don’t we let him do something impulsive for positive gain?” So after Norma’s death and in conjunction with working the case with Rachel, seeing how smart and loyal and caring she is when they walk out of the scene with the Alzheimer’s woman, he’s just so impressed and he’s so in love with her. Then when Norma dies, and Louis says, “Don’t let the moment pass,” he’s moved to do this. He just does it. I thought it would be really nice to end the season with at least one really positive, sweet thing, and we’re very happy about that.

Suits fans, what did you think of Donna’s big announcement? Is Harvey in denial about his feeling for her? And are you glad to see Mike and Rachel so happy? Grade the finale via the poll below, then hit the comments to back up your pick!