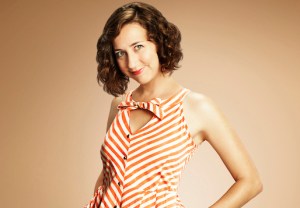 The Last Man on Earth‘s Kristen Schaal has already proven she’s a champion at awkward eating.

Last week, while trying to make Phil jealous of her bountiful tomato garden, Carol chowed down on a “tomahto” like it was no one’s business. In this Sunday’s episode (9:30/8:30c on Fox), she attempts to stomach the taste of her very own meatball substitute: raisin balls!

Though Carol doesn’t consume much of the fruity concoction, Schaal chewed more than her fair share over many takes.

“I pounded so many raisin balls on set,” Schaal tells TVLine. “Part of my muscle tissue is raisin balls at this point!”

Viewers will get to see Phil and Carol share their last meal before becoming husband and wife as the Fox comedy premieres in its regular time period following Family Guy.

While the actual bliss of marriage seems like a far-off goal for the less-than-passionate twosome, they’ll try to make the best of their situation, making clear attempts along the way to comprehend each other’s idiosyncratic tendencies.

“You’ll see in Episode 3 that they’re gonna find a new ebb and flow in the relationship,” Schaal teases, adding that she was “very happy” to see the dynamic quickly progress, allowing Carol to have more fun.

But that doesn’t mean they’ll waste any time getting to the altar. While most shows save a wedding for an end-of-season event, the last man and woman have reasons to speed the process. As you’ll remember, Carol gave Phil an ultimatum: she would happily partake in a physical relationship just as long as he put a ring on it. “If they’re gonna have sex, they had to do that sooner,” Schaal adds.

Though viewers will continue to see plenty of Carol, they won’t learn much about her past, or specifically what she was up to between the time the virus wiped out humanity and the moment she met Phil. “You’re going to have to take [her] as-is, and imagine her in the old world yourself,” she notes, adding that there are “no flashbacks with Carol, unfortunately,” during Season 1.

In the meantime, press PLAY on the exclusive video below, and feast your eyes on Phil and Carol’s middle-of-the-night raisin ball meal.