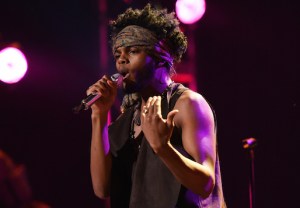 My smile is my makeup
I wear since my break up with you
So Idol, take a good look at my face
You’ll see my smile looks out of place
If you look closer, it’s easy to trace
The tracks of my tears

My name is not Smokey Robinson, and yet tonight, I feel his pain.

AND YES I KNOW I AM BEING MELODRAMATIC.

After all, on Wednesday’s American Idol Season 14 Top 8 Guys Performance Night, there was only one terrible, horrible, no good, very bad elimination.

But when you juxtapose Savion Wright’s (and perhaps even Riley Bria’s) ousters against lesser lights who advanced — and how those lights flickered, sputtered and died out in their subsequent Motown-themed performances — these tiny ripples in the ocean of reality singing competitions feel like soul-crushing tsunamis.

This crisp slap in the face to Savion — like the ones delivered to Kendra Chantelle, Sabrina Sloan, Katelyn Epperly, Aloha Mi’Sho and so many other Idol semifinalists before him — shall pass. But I need at least a little time between now and tomorrow’s dawn ’til I can take Princess Elsa’s advice and let it go.

On that note, let’s get to the proceedings. Eliminated in the course of Top 8 Guys’ Night: Michael Simeon, Riley Bria, Savion Wright and Trevor Douglas.

And now, a rundown of the Top 8 guys: 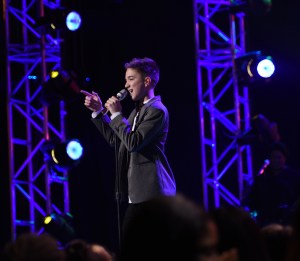 Daniel Seavey – Marvin Gaye’s “How Sweet It Is (To Be Loved By You)” — Grade: C- | I’ve seen more natural movin’ and groovin’ on Teletubbies. But while Harry rightfully pointed out the lack of rhythmic urgency in the teenager’s delivery, how come nobody mentioned his iffy falsetto and his utter lack of emotional connection to the material? J.Lo’s “you’re gonna be a favorite around here” — when she knows the kid is completely out of his depth — was perhaps the most galling comment of the night. Then again, you could go with Keith’s “All you need is to just keep doing this!” NOOOO! Go back to school and focus on your studies, Daniel!

Mark Andrew – The Temptations’ “Papa Was A Rolling Stone” — Grade: C | To quote Sex and City’s Lexi Featherston, “I’m so bored I could die!” I know, I know… at first blush, that seems like an overly harsh assessment of a performance that was mostly in tune. But Mark’s Dave Matthews-esque arrangement — combined with his total failure to dig in to any portion of the song — left me scratching my head wondering if he’s following The C.J. Harris How to Finish Sixth on Idol (But Leave the Impression You Finished 11th) Handbook.

Rayvon Owen – The Temptations’ “My Girl” — Grade: B+ | One of the least exciting Motown classics, immaculately sung. I mean, that final falsetto run was one of the finest vocal moments we’ve experienced on Idol in the last two years. But the judges were not without a point when they expressed a desire to see more colors than shiny, happy Rayvon. If he can tap into his inner Kris Allen and serve up subtle shades of sexy (with the occasional dose of social consciousness), Rayvon could be the tortoise to some of this season’s flashier hares.

Adam Ezegelian – The Jackson 5’s “I Want You Back” — Grade: C+ | Props to Adam for putting a rock twist on a boppy oldies jam, but unless he pulls back the wild-and-crazy-guy expressions, it’s hard to see him as more than a novelty act. After all, while rock-and-rollers are supposed to be having a good time, the goal of this exercise is to find the next Kelly Clarkson or Chris Daughtry, not the host of karaoke night in a mid-sized metropolitan pub.

Clark Beckham – The Miracles’ “The Tracks Of My Tears — Grade: B | Like Adam, Clark took risks with his arrangement — the final verse sounded like a jam session from The Commitments. But I have to agree with J.Lo — I needed a little more heart and a little less head in the end product. Perhaps a return to the piano will help the pillow-lipped crooner rediscover some of his Hollywood Week front-runner mojo? Also, I can’t stress this enough — though it’s a little unfair during Motown Week — dude needs to mix up the Old Soul Tour with an occasional current number.

Nick Fradiani – Stevie Wonder’s “Signed, Sealed, Delivered I’m Yours” — Grade: B+ | I could’ve listened to the acoustic portion of his performance all night (and into tomorrow morning). The arrangement and vibe got a tad more pedestrian — though no less technically lovely — once the band kicked in, but then again when you’re putting your own twist on Stevie Wonder and making the notes look effortless, you’re almost a shoo-in for the Top 10.

Qaasim Middleton – Stevie Wonder’s “I Wish” — Grade: B+ | I’m not sure anybody’s worked this hard to entertain the Idol audience since Fantasia Barrino — the braid-flip on the line “nappy-headed boy” made me howl with glee and the subsequent leg kicks, spins and facial intensity had me completely glued to my TV Screen. J.Lo’s right, though, that Qaasim needs to remind us at some point that he’s got the vocal chops, too — but at this early stage in the competition, it’s probably the smarter play to be unforgettable than it is to be unassailable.

Quentin Alexander — Stevie Wonder’s “Master Blaster (Jammin’)” — Grade: A- | Insert heart-eyed emoji + Hand-clap/Prayer-hand emoji + Martini emoji here. This dude’s tone is the butter to the flour-biscuit of his exceedingly vibealicious delivery. If he wins this whole enchilada — or even makes the Top 5 — then Fox would have to be completely boneheaded not to get him a guest gig on Empire. Yes, what I’m trying to say is that I want Quentin to record his solo debut at Ghetto-Ass Studio — with Cookie Lyon behind the boards. Tell me this wouldn’t get a 4.0 demo rating, folks!

Your turn. Who’d you love from the Top 8 guys? Who should be and who will be at risk? Take our poll below, then sound off in the comments!