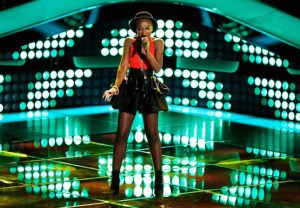 Ever wish The Voice‘s Blind Auditions were shown in strict chronological order?

OK, sure, a straightforward just-the-facts edit might rob producers of the ability to create narrative ebb and flow over the course of two-hour episodes, but there’d be undeniable advantages, too.

Take tonight’s installment, in which soul-stirring blues rocker Kimberly Nichole managed to turn only two chairs, while significantly less-promising vocalists got three or four coaches vying for their affections.

Maybe Xtina and Adam’s rosters were full — or seriously close to it — by the time the New York City-based “rock-and-roll ballerina” made her way to the stage? In my mind, it’s the only explanation for why her audition didn’t result in Pharrell on his knees, Xtina in the fetal position, Adam perched atop his Big Red Chair and Blake digging into his bag of improv-comedy tools for a “Hail Mary” attempt at getting a major talent who falls way outside his wheelhouse.

I know, I know… there’s an alternate explanation that involves me morphing into my secret spirit animal Nina Garcia, glaring at the Season 8 panel and disdainfully exclaiming, “I question your taste level.”

Go ahead and question my taste level, if you’re so inclined, but other than Kimberly, I’m not sure any of the other successful auditioners from Season 8’s third episode hold a candle to some of the promising folks we saw last week. (Then again, I don’t have enough information in front of me to comment on the half-dozen folks who advanced via the dreaded “Montage Treatment.” Grumble.)

With all that said, let’s rank tonight’s Battle Rounds-bound singers in order from least- to most-promising:

8. Michael Leier, Wayne Cochran’s “Last Kiss” (Team Adam) | Friendly dude’s goat-bleat tone and dryer-lint-level stage presence had me wishing no coaches would turn — signaling to him that a return to med school would be the wisest career path. Yeah, I realize how crummy that sounds, but sometimes a “no” vote is the kindest form of cruelty.

7. Sonic, Sam Smith’s “Money on My Mind” (Team Xtina) | Her upper register came like a hunting knife for my ear-drum on the pre-chorus. Girl has some skills — when she’s not flying off the rails — but if she’s struggling on a tune she had weeks to prepare, how is she going to fare when Xtina saddles her with something daft three weeks from now?

6. Jacob Rummell, Bruno Mars’ “Count on Me” (Team Blake) | Teenager’s tale of being adopted warmed my foster-dad heart, but as Xtina pointed out, his vocal performance lacked the kind of “inner fire” that’s the hallmark of Voice champions.

5. Kelsie May — Loretta Lynn’s “You’re Lookin’ at Country” (Team Blake) | Showcased a surprising thickness of tone for a 15-year-old, but that positive was counterbalanced by some very obvious nerves that intermittently hampered her pitch.

4. Barry Minniefield, Billy Paul’s “Me and Mrs. Jones” (Team Adam) | I get that his song choice and delivery read high-end Vegas hotel lobby, but damn, he hit every note square on the nose — and brought the sultry-regretful vibe of the lyrics to vivid life. I guarantee if his tone didn’t tip off the judges to the fact that he’s Season 8’s oldest competitor, he’d have gotten more than one chair to turn.

3. India Carney, Billy Joel’s “New York State of Mind” (Team Xtina) | No doubt this formally trained music major has crazy pipes — but her excessive runs and heavy vibrato clogged up the Piano Man’s timeless melody like a clump of hair in a shower drain. OK, maybe that simile was a little uglier than it needed to be, but this charming four-chair turn still has something to prove to me when she gets to Battles.

2. Travis Ewing, Destiny’s Child’s “Say My Name” (Team Pharrell) | His swampy twist on an uptempo R&B classic proved he’s got creativity — and while he hit a few hinky notes, his gorgeous, smoky tone transported me to the land of “I’m Willing to Overlook a Few Minor Problems.”

1. Kimberly Nichole, Ike & Tina Turner’s “Nutbush City Limits” (Team Pharrell) | Economics major-turned-NYC club performer brought sexy fun and flawless pitch to the Blinds — and the breathy high notes she brought to the verse were an unexpected twist. If Pharrell squanders her during the Battles, I may have to reconsider my undying love for him.

OK, your turn. What did you think of Night 3 of The Voice‘s Season 8 auditions? Who’d you love? Who are you less bullish about? Take our poll below, then sound off in the comments!