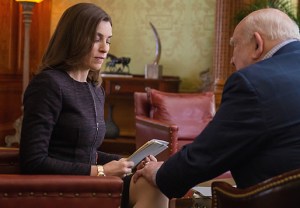 Alicia Florrick has a gay brother who happens to be one of her closest confidantes — an inconvenient truth my brain struggled mightily to suppress during this week’s installment of The Good Wife.

After all, to acknowledge the Alicia-Owen bond while big sis made not a peep of protest during a homophobic rant by a potential fat-cat campaign donor (a fantastically nasty Ed Asner) raised some painful questions: Has a heated run for state’s attorney cracked Alicia’s moral compass? Has her desire for victory and thirst for power turned her into a “bad person”? Or has Alicia always been compromised at her core — her entry into the political Thunderdome merely erasing the patina of civility that’s kept us rooting for her for six seasons?

Of course, part of me thinks those queries are too quaint for real-world situations: Maybe Alicia’s silence in the moment is a small (and ultimately smart) price to pay to gain access to Guy Redmayne’s millions. Sure, this wealthy cretin might think Alicia shares his disgust over the rumored sexual orientation of her opponent Frank Prady, but once she’s in office (or even before then), there’s nothing stopping her from aligning herself with pro-LGBT causes. And while Prady’s open outrage at Redmayne’s lecherous, sexist comments about Alicia makes him the nobler human being, does it also expose him as the weaker political candidate — a man who can’t differentiate doing the right thing from doing the greater good?

The Good Wife‘s ability to explore 50 shades of grey (sorry!) over just one aspect of the campaign trail makes it one of TV’s greatest pleasures. As a gay man myself, I wanted Alicia to swat Redmayne’s paw off her thigh, fire a pity verbal bullet or two, then turn and exit the room. (And that same part of me wanted Redmayne to stand up and cheer, then laugh and tell her his bigotry had just been a put-on to test her moral fiber.) But to a large degree I understand Alicia’s pragmatism (or perhaps her shock-induced paralysis) under fire — and more importantly, I don’t have to like everything she does to continue being fascinated by everything she’s becoming. To that end, let’s examine the meat of the action from this week’s “Dark Money”: 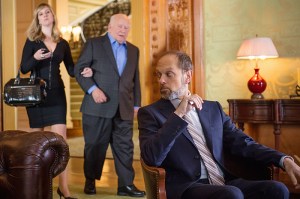 MO MONEY, MO PROBLEMS | I feel like I ought to be playing Cyndi Lauper’s sublime “Money Changes Everything” as I write this paragraph. (Actually, that’s exactly what I’m gonna do!)

So, Alicia learns from Prady that her PAC is running robo-calls in suburban areas — on Prady’s behalf! — from “rainbow activists for Prady” and complete with lisping voiceover. The thinking being conservative voters will flee the slight front-runner in the race over nagging gay rumors and the idea that the LGBT agenda will be his No. 1 priority.

Alicia’s campaign guys plead ignorance at first, until she calls their attention to a dormant Twitter account they’re using to send messages to the PAC about which regions they’re losing and where funds should be spent. It’s a legal loophole — but an ugly one — but Saint Florrick makes it clear in no uncertain terms that the robo-calls need to end.

Would that all her choices this week were so simple. During her backchannel conversation with Prady, she observes him getting a phone call from heavyweight campaign contributor Redmayne — and when she tips off Josh and Johnny, they set up a similar face-to-face for her. They prep her with brutal honesty — her initial idea for an introductory remark, “I hope you will consider,” fills them with disdain — but she arrives much more prepared to pass the cup to the fat cat at a taxidermy-friendly club.

To Alicia’s shock, the crusty old Democrat (whose bored daughter sits in the background staring at her smartphone)  thinks nothing of resting his hand on her knee and shouting, “I got the testicles of a 20-year-old!” Alicia’s droll reply — “Where? In your briefcase?” — leaves him howling, but it also turns out to be her final show of teeth in their conversation. After glossing past her substantive philosophical differences with Prady, Redmayne pledges his cool million — but not because of Alicia’s “pretty eyes,” but because“I don’t like fags.” The best Alicia can do is register mild shock and discomfort — which only eggs Redmayne onward. “Kick that fruitcake when he’s down!” he says, giddily, attributing Alicia’s PAC’s recent activities to the candidate herself. You can practically see the cartoon stars and bluebirds encircling the blindsided candidate’s head as she exits the meeting — but it doesn’t exactly excuse her acquiescence, either.

Prady’s meeting goes a lot differently. When Redmayne lasciviously says of Alicia that he’d “like to split that little missy in half,” Prady flinches — and says he doesn’t feel the need to denigrate his rival.

“I’m not talking about denigrating!” roars the money man, clearly buoyed by a lifetime of unchallenged locker-room boastings. “I’m talking about bangin’ that bitch ’til she screams like a $5,000-per-night whore!” Prady — a man whose sense of black-and-white is perhaps a little more sharply defined than Alicia’s — tells Redmayne he’s disgusting, but the man’s response (and Asner’s hideously unapologetic delivery) turns out to be the last word: “Yeah, but I’m rich, so it really doesn’t matter, does it?”

When Prady later swings by Alicia’s office and it’s clear which way the money is headed, Alicia’s comment that Redmayne is “quite a character” tips off her rival that perhaps she’s seen his true colors. “Campaigning is a lonely profession,” he reminds her, hoping that their odd and secret friendship still holds some weight. But the best Alicia can do is to tell him, “We took down the robo-call. The PAC did.” Later, at home with her wine and her daughter, she breaks down in tears and acknowledges in almost childlike terms (“I was bad today”) how compromised she’s been by her quest for an office that will allow her to do good work. These probably won’t be the last regretful tears she cries before the season ends, methinks. 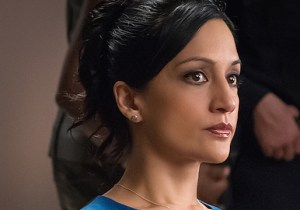 ADVENTURES IN BABYSITTING | Kalinda remains at Lemond Bishop’s beck and call — his opening question to her this week (“Why does it take you eight rings to answer?”) showing the total imbalance of power in the relationship.

Turns out he wants her to transport his son from school back home every day for two weeks — a job that’s less straightforward than it initially sounds. “All-America Mike says my dad killed my mom,” Dylan says plainly, as Kalinda asks him to crouch down in his seat after spying an SUV that’s tailing their car.

Kalinda keeps this detail from Bishop, even as he informs her it’s a “big part of the job” to report back what Dylan tells her. “I’m not really a kid person,” she shrugs, in one of the most delightful pieces of understatement of the 2015 TV season.

Later in the week, though, the sexy-booted investigator intervenes when Mike pushes Dylan to the sidewalk after school — and at the boy’s request, she once again withholds said intel from her unlikely new boss. He calls her back to his house once he spies Dylan’s black eye — and it’s clear he’s already gleaned whodunnit. What’s great about the moment is the way Archie Panjabi lets us see Kalinda’s deep hesitance to speak freely — she doesn’t want a middle-schooler physically harmed or even killed on her say-so. But she’s also a self-preservationist at heart, so she doesn’t dissuade Bishop’s line of inquiry fingering All-America Mike.

What happens next, however, shifts the Kalinda-Bishop power dynamic in a subtle but definitive way. She marches back to his front door — uncertain of what she’s set in motion — and he’s already on the phone… to Mike’s parents. “You will speak to him?” Bishop says to Mike’s dad. “Good, that’s all I ask.”

Bishop knows why Kalinda couldn’t walk away — and so he shares with her how his own father ran off when he was six, that if nothing else, he’d never do the same to his son. Dylan is “the only thing I’m proud of — the only thing,” Bishop adds — maybe free to be real for a moment with someone who has no other connections to his world. Whether the confession will endear Kalinda to Bishop or cause him to resent/despise her, we’ll just have to wait and see. But my guess is this beloved — and soon-to-exit — character won’t wind up dying at the hand of the notorious drug dealer or a member of his crew. 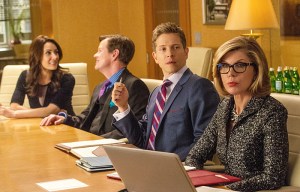 A LEGAL STRANGLEHOLD | The “C plot” for the week involves the return of Dylan Baker’s creepy Colin Sweeney, this time suing a “ripped-from-the-headlines” crime procedural for basing an episode too closely on the death of his wife (which he’s widely suspected of committing despite having been cleared in a court of law).

The story arc allows us to see Cary and especially Diane back in business in the courtroom, while reminding us of the ethical compromises they face in their defense-attorney roles. The case swings when the defense claims that they’re not culpable because, in fact, Sweeney did kill his wife (voiding any notion of defamation). But it’s Alicia — repulsed as always by Sweeney, though agreeing to consult on his case after he threatens to expose the fact that Bishop finances her PAC — who’s able to send the plaintiff running. She seems multiple shots of the Chum Hum sign-in screen throughout the “Call It Murder” episode – forcing the series producers to apologize to Sweeney or risk a defamation lawsuit from the Google-esque search-engine powerhouse.

On that note, I turn things over to you. What did you think of this week’s Good Wife? Where do you stand on Alicia’s ethical compromises? Share your thoughts in the comments!