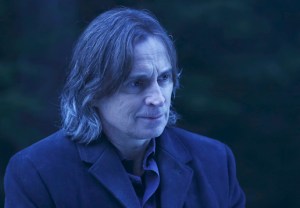 ABC’s Once Upon a Time resumed Season 4 with Rumplestiltskin aiming to “reunite the band” for a nefarious gig, while Emma and Regina teamed to best a beast. Also: What big secret are the Charmings hiding?

Up front, I want to say that I have my reservations about Season 4B and the Queens of Darkness storyline. I’m OK with a multi-pronged threat, but this team-up comes off just a bit random. And in this first episode, Cruella’s the only one who delivered any color; where is Season 1’s scenery-hungry Mal? It’s very early goings, however, so we’ll see how it plays out.

Besides, who can fault a storyline that gives us the mighty Dark One slurping ramen noodles with more than a little self-loathing? There was also something entertaining about Ms. de Vil having been living as Cruella Feinberg, 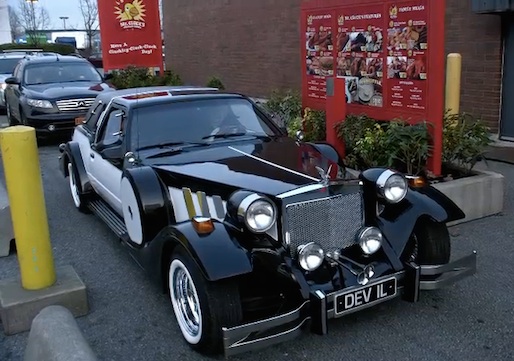 wed to a Wall Street crook and thus now left penniless save for her trademark Panther motor car. And Rumple, Cruella and Ursula pulling up to a Mr.Cluck drive-thru? As Hurley would say, “Awesome, dude.”

But the way Cruella and Ursula gained passage into Storybrooke was too easy. Setting the stage for their infiltration, Rumple — posing as an Oxford linguistics professor (who seemingly raised no eyebrow about translating an incantation for a random librarian in Maine) — fed Belle a spell that not only helped Regina free the fairies from the Sorcerer’s Hat but also let loose Chernabog (see: Fantasia). That’s when Ursula rang her frenemy Regina “out of the blue,” hoping to find redemption in the town Rumplestiltskin had told her and Cruella about. When Ursula traded intel on how to defeat Chernabog — having battled one long ago, alongside Cruella and Maleficent — Regina and Emma, despite the Charmings’ conspicuous protest, used the Frozen scroll to allow the sorceresses across the town line.

From there, it was just a simple matter of Cruella later tossing the scroll back across the invisible barrier to Rumple, because apparently none of the Storybrooke leaders thought to get back this powerful “key”! Reunited and strolling the quiet streets, Rumple pointed out to Cruella and Ursula that Chernabog, in seeking out the heart with the greatest potential for darkness, actually wasn’t after Regina, but was chasing Emma Swan.

At episode’s end, Cruella and Ursula took a meeting with Snow White and David, who previously discussed in private having a “bad feeling” about having the sorceresses in town. It seems their paths had crossed before, 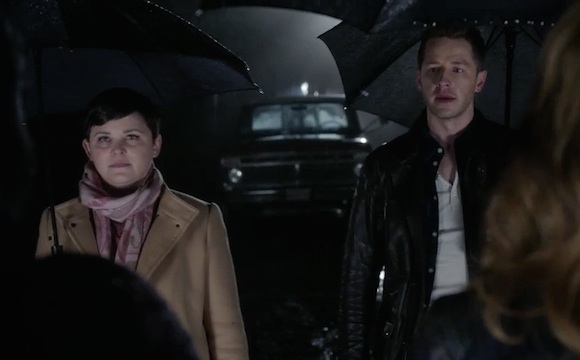 in the Enchanted Forest, at which time something happened which the Charmings very much want kept secret from their loved ones. Snow goes so far as to warm the ladies that if so much as a whiff of their truth gets out, especially to Emma, she’ll personally rip their hearts out!

What could the righteous marrieds possibly be hiding? In slowly revealing this secret, “The goal is to deepen who they are, and take what we’ve already presented and present another layering,” shares Once co-creator Adam Horowitz. With the first hint at the secret to come next Sunday, he says, “Our hope is that by the time everything is revealed, you’ll see it really informs who they were in Season 1.”

Co-creator Eddy Kitsis echoes that the eventual reveal is about “character motivation,” in that once Season 4B has ended, “you will go back and look at the series in a different way.”

Color me quite intrigued!

Elsewhere in the midseason premiere:
* In flashback, we saw how Rumple originally assembled — and duped — the Queens of Darkness, trapping them with the Chernabog after using their distinct skills (or, yawn, tentacles) to get his hands on the Dark Curse.
* Whilst laboring to free the fairies (using the “magic box”/computer and all), Belle and Hook discussed Rumple’s betrayal, with Hook assuring Belle that the Dark One, for all his faults, did love her. Similarly, Emma later reassured Hook that though he had been compelled to do Rumple’s bidding, in the end he earned “a mark in the hero column.”
* After freeing Blue, Regina picked the fairy’s brain about the Sorcerer/Author she seeks. Blue said that the Author and Sorcerer are “very different people,” and that the former’s identity/whereabouts may be hidden in the pages of Henry’s storybook.
* “It’s a party. We should… buckle some swash. Or, you know, whatever.”
* “Wow, you guys really have this down!” “Well, this isn’t our first monster bash.”
* “Is there a dwarf named Evil-y?”
* Regina riding shotgun in the Bug, asking Emma: “What made you choose yellow?”