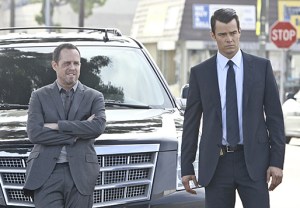 If you haven’t been able to catch an episode of CBS’ The Odd Couple reboot yet, fret not: The network uses many of the same elements in its newest procedural crime drama, Battle Creek, which debuted Sunday.

There’s the disheveled curmudgeon — in this case, Detective Russ Agnew (Dean Winters, Law & Order: SVU). There’s the well-dressed know-it-all: Special Agent Milton Chamberlain (Josh Duhamel, Las Vegas). And there’s a series of unfortunate circumstances that bring the unlikely duo together, forcing them to be a team in spite of their differences.

Battle Creek takes place in a sleepy Michigan city whose police force is quickly running out of resources. Case in point: Agnew and his team must, embarrassingly, use a baby monitor instead of a legitimate wire system to catch a baddie in the opening act of the premiere.

Enter Chamberlain, a clean-cut agent from Detroit’s precinct, who transfers to Battle Creek and instantly shows everyone up. He even brings in more exciting cases, including a double homicide, which he and Agnew investigate together, much to the latter officer’s chagrin.

Right away, it’s obvious that the two officers don’t have the same methods — actually, it’s a little baffling that any of Agnew’s old-school techniques have ever worked — but nevertheless, they’re able to set aside their differences just long enough to track down the culprit.

That said, the duo still has a long way to go before they can be considered buddies. Will you stick around long enough to see a potential friendship form? Grade the Battle Creek series premiere in our poll below, then hit the comments to back up your choice!