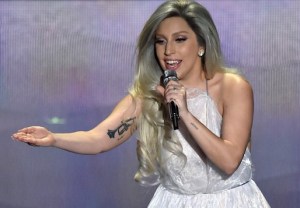 THE PERFORMANCE | Any moment that ends in a warm, extended hug of gratitude from Julie Andrews doesn’t really require additional accolades.

Nevertheless, we can’t help but heap more praise on Lady Gaga’s Sound of Music tribute at the 2015 Oscars.

The typically outré performer eschewed her standard operating outrageousness — no meat dress, no bird’s nest headpiece, no eye-popping set pieces — opting instead for a fluffy white gown and a forest of birch trees.

And then, she delivered a medley from the beloved movie musical (celebrating its 50th anniversary this year) — the epic title track, plus “My Favorite Things,” “Edelweiss” and “Climb Ev’ry Mountain” — proving to the uninitiated that, yes, there are indeed modern pop stars who can stun us using nothing but their voices (no Auto-Tune included).

Gaga took a straightforward approach to the classic tunes — infusing them with a beaming optimism rather than unnecessary runs or melodic twists — her only embellishments being the swish of her skirt or an extension of her (tattooed) arm. In doing so, she took perhaps the biggest risk of all: Inviting direct comparisons to Andrews’ beloved renditions.

Not to worry, though, the pop icon climbed ev’ry mountain of the Rodgers and Hammerstein score. The standing ovation inside L.A.’s Dolby theater — along with Andrews’ sincere “Dear Lady Gaga” response — put the finishing touch on an Oscar moment that now ranks among our favorite things.

HONORABLE MENTION | Over the course of Marvel’s Agent Carter‘s eight-episode run, we saw Hayley Atwell do it all. Derring-do. Sass. Earnestness. Heart-tugging emotions. But in the season finale, all that and more was on impressive display. Whether rolling her eyes hard at Howard’s rakish antics (or desperately talking him down from a hypnotic stupor), getting as good as she gives versus Dottie, letting slip a sweet smile when Sousa’s not looking or, in her final moment, bidding a(nother) emotional goodbye to her “darling,” Steve Rogers, Atwell was every bit as super as Peggy’s stars-and-stripes sporting sweetheart. A very special agent, indeed.

Empire‘s freshman season, Trai Byers‘ college-educated, corporate-minded Andre has been the forgotten son — to his music-minded mother and father, and in terms of the show’s critical buzz. Wednesday’s episode — which found the bipolar Andre ignoring his medication regimen and feeling heartbroken as his brothers took to the studio with his parents to record a legacy record — changed all that. After his cruel father Lucious gave a humiliating “no” vote to Andre’s plan to be backup CEO — and then questioned his place in the family because he’d married a white woman — the eldest Lyon son retreated to a recording studio for a game of Russian roulette. As The Platters’ “The Great Pretender” blasted behind him — and Andre survived another pull of the trigger — Byers’ anguished scream provided one of the most rivetingly dramatic moments in the short history of Fox’s smash-hit drama.

Which TV performances rocked your world this week? Sound off in the comments!