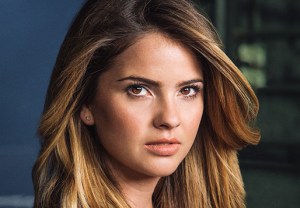 The Teen Wolf cast has returned to Beacon Hills High to film the MTV drama’s fifth season, and star Shelley Hennig couldn’t be happier to be back in its hallowed halls.

“It feels like home,” Hennig tells TVLine. “We go off, we do our movies [during the hiatus] and we come back thinking, ‘This is where we’re meant to be.'”

Below, Hennig talks (as much as she can) about Teen Wolf Season 5, including new challenges for Stiles and Malia, the lingering question of Malia’s lineage and whether or not we should trust newcomer Cody Christian (Pretty Little Liars).

TVLINE | This being your second full season on the show, it must be nice to not be the “new girl” anymore.
You know, I never really felt like the new girl. It’s felt right since the beginning, and I’m so grateful to the cast and crew for making me feel that way. Nobody did any sort of initiation with me, which I appreciated — but we are doing them to Dylan Sprayberry.

TVLINE | And how far into Season 5 have you guys filmed?
We’re kind of filming all over, different episodes, but we’re definitely in the first quarter.

TVLINE | Does the premiere feel like a totally new story, or does it pick up where we left off?
It does feel like we picked up where we left off, but there are a lot of new things to be excited about — and plenty of new things to be afraid of. We also haven’t forgotten the past, which is what I love about the show; it’s not like everybody suddenly forgets about characters that die.

TVLINE | Malia still doesn’t know who her mom is. Is that a focus for her moving forward?
One of the last things said in the last episode of Season 4 was about the Desert Wolf. As an actress, I read that and assumed it would be a part of this next season. I do think it’s important for Malia to figure out who that is, and I think we do start to explore that. It’s important to the character, so I hope we see a lot of that. 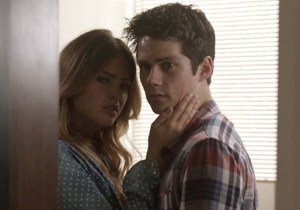 TVLINE | Can you give us a Stiles-Malia update?
They ended really well in Season 4, but they’re going to be seniors this year, and there are a lot of things that happen when you’re a senior in high school. There are big decisions you have to make, including the whole “high school sweethearts thing,” even though I wouldn’t use the word “sweetheart” for Malia; it just doesn’t feel appropriate. But I’m sure there are going to be some real-life changes and decisions that need to be made in order to move onto the next phase of their lives. I’m looking forward to exploring the reality of these teenagers so people can really relate to them. This is Teen Wolf, and there’s never smooth sailing, so I’m going to make a pretty good assumption that something will test Stiles and Malia’s relationship.

TVLINE | Malia and Kira also had a great friendship last season. Will we see more of that?
Oh, I’m almost certain. We love working with each other, and I think it’s a great pairing; two girls kicking ass, not being the damsels in distress. Arden [Cho] and I really enjoy playing that, and I got so much feedback about that at Comic-Con. I wasn’t even thinking about it — to me, girls are kick-ass. It wasn’t like, “Oh my gosh, I get to play a character who gets to kick some ass!” To me, it was normal, but I’ve realized it’s a rarity in television and film. I love that Reese Witherspoon at the Oscars made a point of saying that her production company is looking for material where females can, first of all, have an interesting part, but also play a strong female lead.

TVLINE | I also enjoyed that video Teen Wolf posted on Tumblr. Something about you loving Malia’s shorts?
[Laughs] Oh my God, that was so embarrassing. I had just been at the Grammys a few hours before we filmed that, and I was still delirious. But I do love that Malia wears shorts all the time because it’s super comfortable. This is one of the best jobs I’ve ever had, simply because Malia’s wardrobe is full of the most comfortable outfits ever. Malia’s also an animal. She needs to be ready at any moment. If she’s wearing a skirt, how will she go running through the woods? The shorts are practical.

TVLINE | Lastly, let’s talk about Cody Christian’s character. Should we trust him?
He’s definitely new to Malia; she has no idea who he is. He’s going to stir up some questions about who we can actually trust. We’ll wonder what he’s here for, and there will be a search to figure out if he can be of use to us or if he can’t be trusted.

Teen Wolf fans, time to weigh in: What are you hoping to see in Season 5? Any dream castings for Malia’s mom? Drop a comment with your thoughts below.