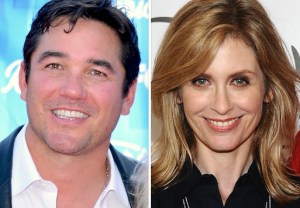 How’s this for super-meta casting: Helen Slater and Dean Cain have landed guest-starring roles on CBS’s Supergirl, TVLine has learned.

Slater, of course, played Kara on the big screen in 1984’s Supergirl, while Cain starred as the Man of Steel in ABC’s Lois & Clark: The New Adventures of Superman. And both guest-starred on the WB/CW Superman drama Smallville, Slater in the role of Clark/Kal-El’s Krypton mom Lara, and Cain as the immortal Dr. Curtis Knox.

Details on who the pair will be playing in the pilot are being kept under lock and key (but feel free to speculate away in the comments).

UPDATE: Supergirl star Melissa Benoist shared on Twitter this behind-the-scenes photo of her with Slater:

As previously reported, Laura Benanti (Nashville) will play Kara’s birth mother, Alura Zor-El, who continues to guide her daughter across space and time.