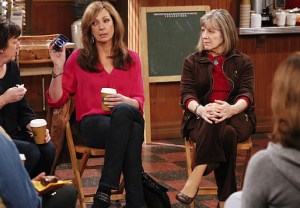 This week, however, her character discovers a new type of intoxication: “Instead of getting drunk with alcohol,” Janney teases, “she gets drunk with her newfound power and status as secretary of her AA meeting.”

Of course, Bonnie’s reasons for taking on her new role are the opposite of amusing: Early in the installment — the show’s first outing in its new Thursday, 9:30/8:30c timeslot — Bonnie makes a heartbreaking confession to pal Marjorie that she almost relapsed in a moment of grief following the death of her lover Alvin.

Ultimately, though, what Marjorie wants Bonnie to learn is that by focusing on other people’s lives and struggles, she can find some respite from obsessing over her own loss.

TVLine caught up with Janney to talk about Mom‘s latest scheduling change, its strong female characters and the prospect of another double-Emmy season in 2015.

TVLINE | You’re moving to a new time slot this week. Any nervousness about that?
This season has really found its legs in terms of the kinds of stories we’re telling and how far we’re going in an unexpected way for a half-hour comedy. But I’m terrified that we’re moving. I hate that we’ve been ping-ponged around so much. I hope it just means [CBS has] faith in us — that we’ve found our viewers and that we are becoming a little bulletproof. I’m sure they want to give The Odd Couple a good chance to hit, and maybe it’ll build the whole Thursday night. That’s what I pray, because I’m just in love with this show so much and I really would love to do it for a good chunk of time.

TVLINE | Bonnie is a character who, from the beginning, has been defined to a large degree by her sexuality and her flirtatiousness. Now that she’s suffered this huge loss from Alvin’s death, what does this mean for her going forward? Can she dip her toe back into the dating pool or is that off the table?
The repercussions of Alvin’s death have not ended. There’ll be some pretty major stuff that Bonnie goes through in trying to recover from his death. She will lose interest in wanting to be with anybody for awhile. I don’t want to give away too much, but it’s very funny how she decides to move on with dating. It’s not the right way that she goes back into dating, but there’s a very funny episode that addresses that issue coming up.

TVLINE | How did you feel when you learned Alvin was going to die? Everything finally seemed to be coming together for Bonnie and then — bam! Ultimately, though, seeing that Mom is a comedy first and foremost, how did you feel about the show heading into this darker arc?
I was shocked and upset that they decided to end Alvin’s life. We certainly all loved him. Kevin Pollak is so funny and we had a great chemistry together. Yet while we don’t want to show these people suffering every moment, [the writers] didn’t want it to get too cozy and comfortable, too “they’re all happy and living happily ever after.” Life happens to people no matter what you’re going through, especially people in recovery. It’s about them surviving in the face of everything. That’s what people in recovery have to do no matter what. If they don’t, the consequences are huge. It’s life and death. Those are the issues the show is about. I don’t think every episode will be about somebody dying, but it’s always going to be a struggle for these women financially, emotionally. I totally trust the writers, though, and they’re doing an amazing job. While some things shock me and make me sad, I’m up for the challenge and I understand what they want this show to be. I get it. 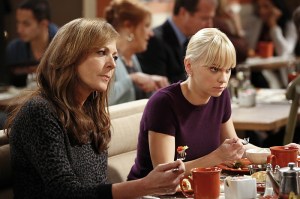 TVLINE | Bonnie is a woman who uses humor as armor — and she keeps it up a lot of the time. There’s a lot of talk in this week’s episode about discovering your authentic self or really exploring who you are post-recovery. How has it been mining Bonnie’s vulnerabilities.
I love those moments of showing the underbelly of a character. And I love the armor people put up, looking at the things that happened to them growing up that made them have to put on the armor in the first place. Any character I play, no matter how funny or silly, I always think about the underbelly, of what’s the truth inside. Why does someone act that obnoxiously? Why does someone drink that much? Why are they that funny — like a standup comic? They’ve got to have a lot of pain under that. I’m always like a little detective looking at the underside. It’s a great opportunity for me as an actress to get to do things like pull up my skirt and jump out a window — and then also sit and tell people very honestly that I lost the love of my life. It’s a wonderful gift as an actor to get to do all of that in one show.

TVLINE | I loved that closing moment in the episode where Alvin dies — where Christy finally opens up and breaks down, and you just sit there and almost wordlessly hold her. The mother-daughter relationship here is a really great one — and there are just a lot of interesting scenarios between all the female characters on this show.
It’s like the other day where Octavia Spencer has been doing a lot of episodes with us and Jamie Presley is back with us. Jamie and Octavia and Mimi [Kennedy] and Anna [Faris] and I doing this scene together. Some of us are well over 30, but all of us are over 30 and getting to do this female-driven show. It’s wonderful. You know, it’s not surprising coming from Chuck [Lorre]. He’s always written really well for women.

TVLINE | We saw you pick up two Emmys last year — Best Supporting Actress in a Comedy (for Mom) and Best Guest Actress in a Drama Series (for Masters of Sex). You’ve been killing it on Web Therapy this year, too, so is it possible you could do back-to-back double wins?
I don’t know.  Last year was a really extraordinary moment that I didn’t see coming at all. I never thought that would happen. Winning that Emmy for Mom, the second one that I won…I was so overwhelmed and exhausted. I didn’t want to go out to all the parties because I was so tired. I couldn’t talk anymore. I just said, “I need to go home.” I remember going to the grocery store in my gown with my friend who came with me. We cooked some food and sat around talking. [Laughs.] I was supposed out partying and celebrating! I don’t know what I’m trying to tell you, except for it’s a remarkable time in my life. I don’t know if you can repeat anything. It won’t be the same. It’ll be something different. But I was really lucky that I got to do those two roles at the same time.