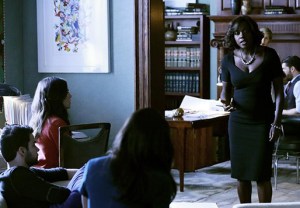 What to cliffhanger and what not to cliffhanger? That was the question facing How to Get Away With Murder showrunner Pete Nowalk as he approached the Season 1 finale of his twisty, twisted mystery (airing tonight at 9/8c on ABC).

“I hope it’s not torturing the audience as much as it is keeping them questioning,” he explains of the path he ultimately took. “We knew from the beginning we really needed to show what happened to Lila. We saw how Sam got murdered, and now we needed to see the original murder. But there was a lot of debate and me changing my mind and banging my head against the desk on how to end that storyline.”

To that end, Nowalk says he convinced director Bill D’Elia to shoot two versions of the ending — just to give him some options.

What might some of those options entail? TVLine caught up with Nowalk to try to pump him for intel about mysterious Rudy (and his enigmatic utterance of “wet”), Nate’s fate and the possible surprise lurking in Wes’ bathroom. 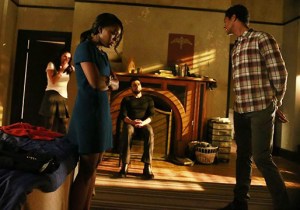 We know we’ll find out who killed Lila, but can we expect that any of the murderous characters will be brought to justice? Or is “justice” something you’re saving for Season 2?
[Long pause] That is the question for these characters in the finale: Is there justice? Were they justified in doing what they did to Sam? And that weighs especially heavily on Wes. The arc of the season — what Annalise has been trying to instill in her students — is that the justice system is not black and white. It’s not pure. Justice, in the way I think about it, well, it’s not so simple for Annalise. And I don’t think it’s going to be so simple for the students, either.

ABC’s official description for the finale notes that the Keating 4 “may have dug themselves too deep a hole” for Annalise to save them. And we know Michaela’s ring, Connor’s car, the police officer who saw them on murder night, even Rebecca’s call to Nate could bring their house of cards tumbling down. How dicey will things get for them — given that Nate being framed seemingly got them off the hook again.
They’re definitely feeling the threat of getting caught in the finale. It’s written as two episodes, they’re just airing them back to back. And so it’s just a matter of which part of the show where they’re going to feel the heat. It’s definitely going to cause them to panic.

Last week’s episode ended with Wes and Laurel finding Rudy — the mysterious former occupant of Wes’ apartment — and all he managed to do was utter the word “Wet” when he saw Rebecca’s picture. Wes immediate jumped to the conclusion he must be talking about the water tower, but that seemed like a huge assumption. Could Wes be off the mark completely?
You should be thinking about it the same way you phrased your question. Wes jumping to the water tank is a really big leap. He is going to have to figure out if he’s right — and so are the other students. 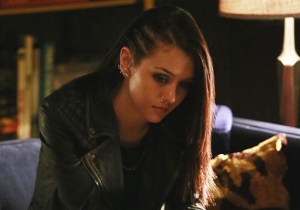 Neither of the murder victims were scratched up — and yet the show continues to show us the claw marks in Rudy’s old apartment and over his bed in the psychiatric hospital. Are those claw marks going to be part of a Season 2 mystery — or do they tie in directly to solving the Lila mystery?
That will play directly into our mystery this season.

The finale promos keep teasing that the final minutes of the episode need to be seen to be believed — paired with a visual of Annalise entering Wes’ bathroom. What can you tease about that?
I would say don’t read too much into the previews. The audience knows already that our promo people do such a good job, but sometimes it’s not exactly what you think is happening. I love that people are looking at the promo for clues — but I don’t want to reveal anything that’s actually going to happen. [Laughs]

Could another person be dead by the end of the finale?
I want to take the fifth on that too, if that’s OK?

Did you manage to shock your cast with your final twists?
What was fun is we had written a bunch of different endings and versions of the endings. Some of the actors had not read the most recent version of the script, so at the table read, yeah, there were some gasps and some “holy bad word.” [Laughs] It was fun to see their jaws hit the floor. 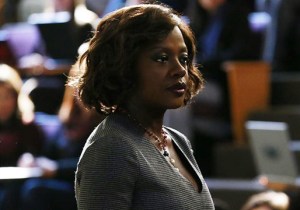 Annalise knows Nate did not kill Sam — and her conversation with Michaela last week implied she had the situation handled. We also saw her slip him a phone number for a new attorney. Is she three steps ahead in terms of clearing him (even though she’s the one who set him up? Or could Nate really go down for this crime?
It’s definitely possible, and when Annalise decided to frame Nate for the murder, she was taking a real risk. As much as she’s knows how to figure things out, she’s flying by the seat of her pants and hoping things will go her way. That involves a lot of work, strategy and prayer — or whatever her version of a prayer is — to have both the students and her get away with this, and also to help Nate. It’s very complicated. And there’s a lot of work she needs to do to make that happen.

Are you excited for tonight’s HTGAWM finale? Any theories on who killed Lila or how the various mysteries might end? Sound off in the comments!