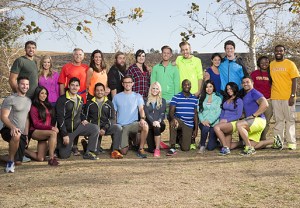 With 25 seasons and 15 Emmys under its belt, The Amazing Race is now letting love lead the way.

For its 26th season, the CBS reality competition has recruited 11 dating duos for its next race around the world.

The catch? While six of this year’s twosomes have been dating for quite some time, the remaining five teams have been paired up as “blind date” couples, meeting for the first time on the race and hoping that their instant chemistry (or lack thereof) can carry them to the finish line.

Before we look at the finer details of Wednesday’s 90-minute premiere, here’s a breakdown of the competing couples:

I’ll admit: When I first heard about The Amazing Race‘s new twist, I was skeptical. Isn’t this show better than that? Did we really need to merge a clever competition series with the awkward drama of The Bachelor? We did not.

But, aside from a few superficial moments in the season premiere — seriously, how many times did Laura (who bears a ridiculously striking resemblance to Amy Adams) have to remind us how attractive her “man candy” partner is? — the blind date twist actually seems to be working out well.

The first leg of the race brought contestants to Tokyo, Japan, where they were given a choice: Memorize different brands of sake, or master a synchronized dance routine. Lo and behold, the first three teams to meet Phil on the pit stop mat were blind date couples, including Jenny and Jelani, who earned an Express Pass for their first-place finish. Whodathunkit?

One newly matched pair that does seem to be struggling, though, is Hayley and Blair. First, Hayley took her sweet time getting through the initial obstacle course that allowed players to pick their flights to Tokyo (“It looks like I have diarrhea!” she cried as she washed the mud off her legs). Then, Blair led his partner down the wrong street in Tokyo, choosing to ignore Hayley’s correct directions. And, in general, the pair seems to have a hard time making conversation, which might not bode so well as the race’s challenges get tougher.

That said, Hayley and Blair weren’t the least fortunate team of the day. That honor went to Jeff and Lyda, who struggled to perfect the synchronized dance moves, then found themselves the victims of a cold, cold Blind U-Turn. (I know Rochelle and Michael have a lot on the line, but seriously, who U-Turns another team on the first leg?!)

What did you think of The Amazing Race‘s Season 26 premiere and the blind date twist? Choose your three favorite teams (so far) in our poll below, then hit the comments to back up your choices!