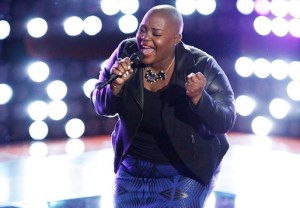 This just in: We’ve made it through the first four hours of The Voice‘s eighth season without a single, unwelcome contestant montage! To quote Jay-Z and the MIA (but forever fabulous) Amil, “Can I get a what-what?“

Yeah, OK, the next couple weeks of Blind Auditions are almost certain to deliver multiple instances of Battle Rounds-bound singers getting introduced via 0.387 seconds of footage, but let’s take our victories where we can find ’em.

To that end, Tuesday night’s episode also packed in plenty of good vibrations (a phrase that conjures up images of Oscar nominee Mark Wahlberg in his shirtless youth, at least to anyone who came of age in the late ’80s/early ’90s) and at least a half dozen contestants with enough talent to crack the Live Playoffs (should everything break right).

With all that said, let’s rank tonight’s Battle Rounds-bound singers in order from least- to most-promising, in a Twitter-friendly 140 characters or fewer (when possible):

8. Blaze Johnson — The Fray’s “How to Save a Life” — (Team Adam) | Nice kid, but his woeful breath control had me wondering how he managed two chair turns, while the vastly superior Bryan Pierce (bearded dude who covered”Rocket Man”) got none.

7. Brook Adee — Bon Iver’s “Skinny Love” — (Team Blake) | Sixteen-year-old with a silky tone infused Bon Iver’s big hit with a little piano-driven drama, but I didn’t feel her connection to the lyrics quite as deeply as I wish I had. On an average episode, though, she’d be in the Top 3 auditioners for sure.

5. Anthony Riley — James Brown’s “I Got You (I Feel Good)” — (Team Pharrell) | Longtime street performer had all four judges turning within seconds, but while he was pretty much note perfect, I didn’t hear as much originality or oomph as I’d expect from a contestant getting this much hype. Battle Rounds will prove whether I’ve got a tin ear.

4. Mia Z — B.B. King’s “The Thrill Is Gone” — (Team Pharrell) | I’ll be the first to admit this 15-year-old needs to iron out her mushy-mouthed Winehouse-ian affectations, but her sultry tone and ability to hit Mariah-level dog-whistle notes — combined with Pharrell’s mischief and magic — has me definitely (Sugar) Jones’in for more.

3. Deanna Johnson — Kodaline’s “All I Want” — (Team Adam) | The Voice loves its returning auditioners and their tales of redemption — and this Season 5 evictee delivered the goods by bringing emotional and tonal shading to a song you don’t expect to hear on a reality singing competition. I’d like about 25% more swagger — at least in Deanna’s uncertain facial expressions — but that kind of thing can change drastically after a few weeks of mentoring.

2. Joe Tolo — The Bee Gees’ “To Love Somebody” — (Team Xtina) | College student’s lower register was as itchy and scratchy as a Simpsons interlude, then gave way to creamy soul-man intonations when he reached the chorus. Sure, he only got two chairs to turn — and one of ’em (Blake) didn’t seem all that enthusiastic — but if Xtina can upgrade his stage presence, he might be the Season 8 dark horse.

1. Tonya Boyd-Cannon — Pharrell’s “Happy” — (Team Adam) | I swear there was an actual wink in Tonya’s voice as she upgraded Pharrell’s feel-good ditty with intriguing runs and a side order of attitude. And yes, while her work with a prison choir gives her a winning backstory, it’s her ability to know how much extra sauce is just enough (without being too much) that could make her a true contender.

On that note, I turn the mic over to you. What did you think of Night 2 of The Voice Season 8 Blind Auditions? Vote for your favorites in our poll below, then expand on your thoughts in the comments!