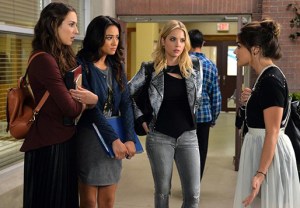 The hunt for Cyrus on Tuesday’s Pretty Little Liars led Aria and Hanna to the hospital, where they learned the name — or at least the alias — of the man who put him there: “Varjack.”

Of course, it’s anyone’s guess as to who that is, though Hanna did wisely point out that it’s the same last name, albeit misspelled, as a character from Breakfast at Tiffany’s. The girls were quick to recall how much Alison loves that movie, but isn’t Ezra the one who first told Ali she reminds him of Holly Golightly? It’s almost as if you can’t trust anyone on this show, anymore.

But wait… an even bigger surprise came when Aria returned home looking for Mike — and ended up kissing Andrew! (For the record, commenters on my recaps often accuse me of reading too much into their connection, so I’ll just leave this here.) 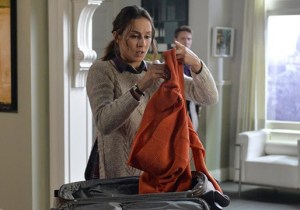 BLOOD BAG | Meanwhile, Spencer was living out a proper British nightmare across the pond. Her interview at St. Andrews was going swimmingly, as they say, until she suddenly realized her purse was leaking… blood. And since it wasn’t detected when she went through airport security, Spencer deduced that “A” must have planted it while she was in London. Of course, her trip wasn’t a total bust; she did, after all, get to spend time with Wren’s flatmate, who sputtered adorable English phrases like “peckish,” “mobile” and “bugger off.” (Oh, and for those of you wondering where you’ve seen that actor before, he played Kurt’s college boyfriend Adam on Glee. You’re welcome.)

TOO CLOSE FOR COMFORT | Back in Rosewood, Emily continued to make the kind of nonsense decisions that surely elicited a chorus of “No!”s and “Why?”s from viewers. For example, after learning that Talia was leaving her husband and would soon be homeless, Emily offered her a room at her house because her mom is out of town. (Isn’t that convenient?) Then, because it’s totally normal for a 20-something to skulk the hallways of a high school, Emily invited Talia to join her dance rehearsal. Talia sort of redeemed her weirdness by standing up to Emily’s pageant liaison — the board wanted Emily to drop out because of her proximity to the Alison murder trial — but something tells me that, too, will soon blow up in her face. (Run, Emily! You in danger, girl!)

With only three episodes left until the “big A reveal,” what are your newest theories? Is Ezra more involved than we know? And what’s up with Talia? Drop a comment with your thoughts below.