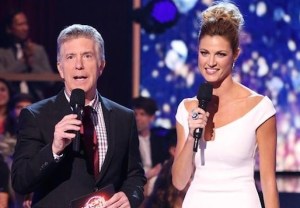 R&B icon Patti LaBelle, TV’s erstwhile Chrissy Snow, Katniss Everdeen’s kid sister and the first openly gay man drafted into the NFL are among the celebs who will be competing on Dancing With the Stars Season 20.

Also: Derek Hough will be a part of this cycle, jetting back and forth from coast to coast as he juggles DWTS with his role in Radio City’s New York Spring Spectacular. That should work out really well for all involved.

The ABC competition’s 10th anniversary season — which will award a special golden mirror-ball trophy to the winner —  kicks off Monday, March 16 at 8/7c.

Here are the celeb/pro pairings, as announced Tuesday. Defending champ Witney Carson‘s partner will be announced “at a later date,” but was heavily hinted to be The Bachelor‘s Chris Soules.

Which of these celeb(/”celeb”)/pro pairings gets your early vote?