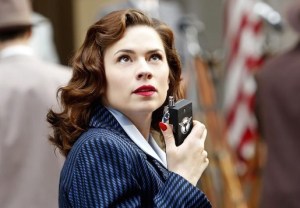 Marvel’s Agent Carter on Tuesday night brought its season to a satisfying conclusion — but was there almost too much closure, not enough dangling threads?

Picking up where last week’s episode left off, the SSR arrives at the movie house to find 47 innocents dead, the cause as shocking as the grim scene itself: “They killed each other.” The trigger for the melee is uncovered by Sousa, who inadvertently gets a whiff of the Item 17 gas and then violently lunges for Thompson, before getting subdued.

As the SSR ponders the ramifications of nine more canisters of the stuff being missing, Howard Stark arrives to fill in the blanks: Item 17 aka “Midnight Oil” was developed to help keep troops awake and energized, but as with many of his stolen “bad babies,” it had its glitches. Alas, back then some of the batch was stolen and used on Russian troops in the infamous Battle of Finow — and that’s why revenge is quite a personal matter for Dr. Ivchenko aka Johann Fenhoff, who survived the battle but saw his brother die, and thus is out to “punish” Howard.

The SSR baits a trap for Fenhoff, staging a presser in broad daylight, but Stark is the one who winds up ensnared, hopping into a police car manned by two Leviathan stooges. The SSR meanwhile realizes Fenhoff’s endgame: to target Times Square on VE Day. Worse, Fenhoff hypnotizes Stark into piloting the attack plane, under the guise of receiving 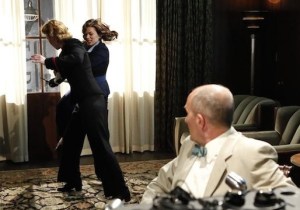 As Fenhoff guides Stark on his misguided mission via radio, Peggy arrives and gets into it good with Dottie. The two badasses slug it out, each getting in some brutal blows, until Peggy kicks her adversary out the window, onto an airplane wing below. Fenhoff meanwhile has fled into the main hangar, where he believes himself to be hypnotizing Sousa into killing Thompson. Sousa, though, is wearing earplugs and thus dupes the doc until he’s close enough to clobber the old man.

After noting that Dottie has gone missing after that nasty fall, Peggy gets on the radio with Howard and is able to snap him out of his fugue just in time, before Jarvis needs to shoot him down, saying, “We have to move on, all of us. Impossible as that may sound. We have to let Steve go.” Disaster averted! Afterward, Peggy’s SSR colleagues give her a round of applause, but it’s Thompson, to Sousa’s disgust, who fields the thank you of a senator (and President Truman himself). But Peggy is not perturbed: “I know my value,” she says. “Anyone else’s opinion doesn’t really matter.”

As the finale winds down, Sousa asks Peggy out for a drink, but she sweetly defers (and privately smiles afterward); Jarvis relays Howard’s invitation for both Peggy and Angie to stay at the Stark manse (though I’m a bit worried about whom Angie really ran off to telephone…), as well as offers his future services to Peggy “at a moment’s notice”; and Peggy has a date with the Brooklyn Bridge, from which she pours the last vial of Captain America’s blood into the river: “Bye, my darling,” she sighs.

In the coda, we drop in on Fenhoff, whose face has been shackled Hannibal-style (lest he lull anyone else to “Focus, focus, focus…”), as he is thrown behind bars… alongside Arnim Zola (played by the Captain America films’ Toby Jones). The biochemist/onetime Red Skull ally assures his cell mate that despite Leviathan’s setback, “New visions will arise… There is another way for us to collaborate,” imprisoned as they are here in America, “the land of opportunity….”

What did you think of Marvel’s Agent Carter? Would you like to see it come back for Season 2, same as this time, during the winter break?