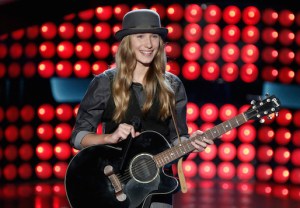 The Voice‘s Season 8 premiere featured every type of contestant that typically activates my “No bueno!” response: the wide-eyed teenage boy in a hipster hat (whose parents were barely zygotes in the heyday of CCR, the kid’s alleged fave band); the music-industry vet with a big-time connection to one of the judges; the girl with a backstory that will spawn a dozen “Upworthy” Facebook links ending with the words “And you won’t believe what happens next.”

So how is it, exactly, that I pretty much loved all of the above — and several other auditioners, to boot?

Maybe it’s because beauty — as Madonna so astutely pointed out in “Vogue” — is where you find it. And while contestants’ pre-performance packages can be tweaked, edited, manipulated and cajoled for maximum reality-television impact, what they do in their 60-90 second musical performances stands alone, like the cheese at the end of “The Farmer in the Dell.”

And the good news is, as NBC’s competition juggernaut enters its eighth go-’round (while main competitor American Idol rolls on in Season 14), there seems to be no shortage of talent supply popping up in these 50 great states of ours.

Better still, even the no-chairs-turned auditions this year are giving off good vibrations: Pharrell Williams grabbing a mic and duetting with noticeably nervous teen Bryce Sherlow legit made me dab at the corner of my eye with a Kleenex. (OK, a single salty droplet may have streaked down my cheek. And yes, I want her to come back for Season 9. Way to get us hooked early, Mark Burnett!)

With all that in mind, let’s rank tonight’s Battle Rounds-bound singers in order from least- to most-promising, in a Twitter-esque 140 characters or fewer (whenever possible):

8. Rob Taylor, Luke James’ “I Want You” | If I wanted to hear high notes like that, I’d just put the kettle on Power Boil for 90 seconds.

7. Joshua Davis, Bob Dylan’s “I Shall Be Released” | Nothing wrong with this 37-year-old’s bluesy tone, but already the specifics of this performance are getting hazier for me than memories of Christina Milian’s time in the Voice Skybox.

6. Sarah Potenza, Faces’ “Stay With Me” | Gruff husky tone on this highly likable Nashville vet. Dropping to one’s knees at the end of a number, however, does not necessarily demonstrate true soulfulness.

5. Cody Wickline, George Jones’ “He Stopped Loving Her Today” | Adorably reticent West Virginia nursing student’s tone got froggy in spots, but his interpretation of this country classic was so emotionally electric it needed child-safety outlet covers.

4. Teeva Gibson, Lana Del Rey’s “Young and Beautiful” | Xtina was right that this 16-year-old daughter of two deaf parents needs a little work on technique, but the intimacy of her verses — combined with her explosive glory notes — hinted at a potential Season 8 dark horse.

3. Lowell Oakley, “Don’t Get Around Much Anymore” | I’m not ready to board Pharrell’s Hyperbolic Bus of “No One Has Ever Sung Like Lowell Before” just yet. But Lowell’s voice was as rich and luxurious as five-star hotel sheets.

2. Meghan Linsey, Nazareth’s “Love Hurts” | Onetime half of Billboard-charting country act Steel Magnolia showcased a mesmerizingly gritty tone alongside terrific vocal control. If she veers away from country and more toward a rock-blues hybrid, she’s a real threat to stay in the competition well past Easter.

1. Sawyer Fredericks, “Man of Constant Sorrow” (Team) | The depth of this kid’s tone, the originality of his arrangement and the fact that he chose a traditional folk song re-popularized in a very weird George Clooney movie aren’t the kind of attributes you’d expect from a super-shy home-schooled teenager from upstate New York. The delicious juxtaposition, however, is what makes him a real contender for the crown.

On that note, I turn the mic over to you. What did you think of The Voice Season 8 premiere? Vote for your favorites in our poll below, then expand on your thoughts in the comments!