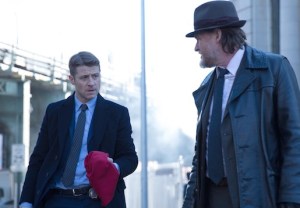 This week on Fox’s Gotham, Jim and Harvey were on red alert, Alfred got a blast from his (dark) past and Fish Mooney shared with her captors her, ahem, vision for the future.

So here we are, Episode 17, and still there are episodes that frustratingly toggle between compelling-ish storylines and patience-testing wheel-spinning.

WHAT WORKED IN ‘RED HOOD’
The titular storyline, especially coming off of last week’s Joker tease (courtesy of Jerome/Cameron Monaghan), was interesting to me on a personal level, since the Red Hood/Joker origin story is one I most vividly remember reading in the comics as a young’un. Here, they stayed true to the bank robber aspect, as each member of a band of run-of-the-mill thieves took turns donning the crude cloth mask, feeling magically “empowered” and/or impervious with it on. As with Jerome, there was a pointed tease — the first robber had a knack for “theater” and a cackle akin to Batman’s famous foe, but he got offed in a jiffy. #RedHerring With the help of a local store owner, Jim and Harvey eventually nab the remaining thieves, though the red hood is then seen being picked up by a young man, destined to “live on” another day.

I also was on board for the Wayne Manor story, where Reggie, one of Alfred’s old mates from Her Majesty’s Secret Service, paid an unexpected visit, full of drink and down on his luck. Bruce invited Alfred’s chum to crash with them for a bit, and that went well enough until Reggie started teaching Bruce a rougher form of close combat. Later, the three gents mended fences over good wine (presumably pop for Master Bruce) and war stories that hinted at Alfred’s not-so-noble past. When the Wayne butler went to send his pal on his way with fresh clothes and a picnic lunch, Reggie ran a blade through him, sending Alfred to at least the hospital for a few weeks. And as the episode drew to a close, we saw that Reggie actually was doing recon work for the Wayne Enterprises board, reporting back on the extent of Bruce’s evidence of wrongdoing at the company.

WHAT DIDN’T WORK
Maybe someone better versed on the Dollmaker’s larger role in DC Comics canon can illuminate me on the potential (if any) for this storyline, but I find Fish’s latest tale just so ridiculous. The “basement” she and the other prisoners live in isn’t the slightest bit interesting, visually or conceptually; the ease/expedience of her power grab was laughable; and her current role as some “voice of reason”/compassion is undercutting any teeth the character had to start with. So, she demands to meet with Dr. Dulmacher himself, but gets stonewalled… and then pampered. And when she and the facility’s “manager” hit another impasse, Fish’s answer is to grab a spoon and gouge out her eye before someone else can. OK.

Meanwhile, Penguin continues to run a lousy nightclub, cuing up the umpteenth scene of a third-rate stage act performing to middling reviews at that venue. The solution? More alcohol! But! Maroni has cut off Penguin’s club. So? Penguin looks to intercept a truck. But! Butch beats him to it, enlisting some dirty cops to keep the booze flowing at the club. And this all matters because…?

Hell, I rank the Barbara/Selena C-story slightly above Fish/Penguin fare, if only because I honestly have no flippin’ idea where this is going, plus it was fun to see Selena cut down her hostess: “And look where that got you.” Ouch. And yet, true.

What Gotham storylines are currently floating your boat?