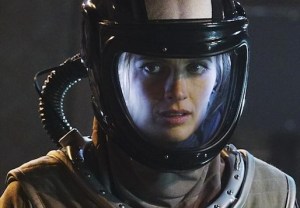 This week on ABC’s Castle, Rick and Kate went to “Mars” — was the end result out of this world, or just spacey?

Considering I could barely bring myself to share with y’all the still photos from this episode, as silly as they appeared on the surface, this was an instance where I was pleasantly surprised by the execution surpassing the premise.

For one, the Case of the Week — in which a crew member on a high-tech, closed-environment Mars landing simulation was murdered — was impressively involving and kept me guessing… until the last act where it all kinda fell apart, swapping too many better suspects for a conspiracy among the other crew to snuff their colleague. The inclusion of a Mars rover as the “murderer” was quite novel, as was the “interrogation” and surreptitious override of M.I.R.A., but the “gassing” sequence and Beckett’s sudden realization that she could use her cell to call for help nudged mine eyes in the direction of rolling. (Besides, in the name of “preventing cheating,” wouldn’t cell phone signals have been jammed down there…?)

Off-setting any pickable nits in the story was the fun banter throughout, some of which has been excerpted below. Then, as an unexpected bonus, the final act’s revisiting of the B-story — Rick’s loft run amok and crowded by Alexis’ heretofore invisible friends as well as Martha and her pajama-borrowing beau — sprung on us the twist that Martha had decided to find her own place, having achieved a certain amount of success as of late and sensing there soon might be some “little Castles” running around. Didn’t see that coming, surprised by how much that reveal affected me.

THE NOTABLE & QUOTABLE
“You signed up to go to Mars?”
“A couple years ago.”
“Where was I?”
“We were fighting.”
(And then Beckett’s own version of same later on.)

* Ryan likening the “lifeless orb” of Mars to Jenny’s grandmother.

* “If you think that’s how I get pregnant, we need to talk.”

* Rick’s Captain Kirk-like narration of his and Kate’s crimesolving mission.

What did you think of “The Wrong Stuff”?