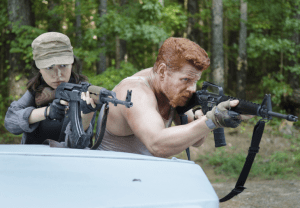 Though a simple handshake would have sufficed, Rick rolled out the welcome mat for fresh-scrubbed stranger Aaron in this week’s episode of The Walking Dead by laying claim to his rations, slugging him, tying him up and sentencing him to cruel and unusual punishment. Which amounted to what, exactly? Read on and find out.

NO KIDDING | As “The Distance” began, Sasha and Maggie introduced Aaron to Rick and Co., and explained that the mystery man had a camp and wanted them all to audition for membership. And you had to give the guy credit — even he knew that “‘audition’ makes it sound like we’re some kind of a dance troupe.” So he tried to make light of it, joking, “That’s only on Friday nights.” All he got in response was crickets. (Rough crowd!) Pressing on, he suggested that the group look at his pictures of the well-protected community — not a mere camp, he was quick to note, but a community. This seemed to win over Michonne — she flashed Rick a meaningful look — but next thing you knew, Grizzly Grimes had coldcocked Aaron before he’d even gotten to snapshot No. 2! “So we’re clear,” Michonne angrily told Rick afterward, “that wasn’t a ‘Let’s attack that man’ look, it was a ‘He seems like an okay guy to me’ look.” Unfortunately — for all concerned, really — Rick wasn’t interested in deciphering Michonne’s facial expressions. The gang’s (understandably) paranoid leader was 100 percent certain that whoever Aaron was with, “They’re coming for us.”

TRUTH OR DARE | Nothing could convince Rick that they weren’t in jeopardy — not Maggie pointing out that Aaron could’ve easily gotten the drop on her and Sasha when he had the chance, not Aaron reminding the former cop that he had left them bottles of water and hadn’t set the barn on fire to pick them off one by one… nothing! Neither could Aaron make Rick believe that there was only one other person out there on this recruiting mission. Total stalemate. Finally, so that her pal could be sure of something — anything! — Michonne decided to embark on the two-mile walk it would be to see if Aaron was telling the truth about there being two vehicles parked (semi-)nearby. Of course, Rick argued that it was dangerous. But, she countered, it would be even more dangerous — and nuts — to pass up a chance to possibly give Judith a home. So off Michonne went, with Glenn, Maggie, Abraham and Rosita for back-up. If they didn’t return in 60 minutes, Rick informed Aaron, “I’ll put a knife in the base of your skull.”

EXTREME MEASURES | After Rick sent everyone else outside — together in the barn, they were a target, he reasoned — Judith began to cry, so Aaron offered her dad the applesauce he’d brought to show the group that his community had apple trees. But, same as with the bottles of water before it, Rick was suspicious. So, despite the fact that Aaron hates — detests! — applesauce, Rick forced him to eat some before serving any to his daughter (who has become the cutest TV baby since Raising Hope, no?). Later, when Michonne, Glenn, Maggie, Abraham and Rosita returned with the news that Aaron’s story checked out — they’d found a car and an RV — Rick said that the rations they’d taken from the camper (off-brand SpaghettiOs = manna from heaven) were no longer Aaron’s whether they joined his community or not. Or not?!? Carl exclaimed. Aaron was telling the truth, so why WOULDN’T they join his nice, safe community? “We need this,” Michonne said. “So we’re going… all of us.” Even Daryl had to admit that the barn stank of horse s—. There was just one (more) problem: Aaron wouldn’t disclose the community’s exact location, he wanted to drive them (as he’d done with every other group of recruits). No dice. So, as an alternative, he gave directions… which Rick promptly changed. What’s more, they wouldn’t leave until sundown, so that if it wasn’t safe, they could get away before Aaron’s people even knew anyone was at their gates.

NIGHT MOVES | That evening, riding off into the darkness with Aaron, Michonne and Glenn, Rick discovered that the car’s glove compartment was full of license plates. Aaron was trying to collect one from all 50 states to put them on a wall of his house, he explained. Wait, you have a house?!? Michonne asked. Yep. But when he showed her a picture of it, she realized that he had exactly zero photos of any people in his community, panicked and asked him the three big questions (1. How many walkers have you killed? 2. How many people? 3. Why?). Though his answers were fine, it didn’t matter anymore: Rick had found a listening device, meaning that they could be driving into an ambush. Just as bad — worse? — before Glenn could pull a U-ey, they plowed into so many walkers that severed limbs stalled the car. (At least the RV with everyone else in it had turned back in time. Of course, now everyone else was separated from Rick, Glenn and Michonne!) Next, a flare shot up in the distance, causing Aaron to freak. “This is over,” he hollered. “Let me out.” While he made a run for it — with his wrists still bound, it bears mentioning — the others shot their way through a pack of walkers. After nearly being bitten (foreshadowing?), Glenn saved Aaron from a walker and untied him. In return, Aaron used Glenn’s own words on him: They can make it through this, he insisted. But “we can only make it together.” So, when they reunited with Rick and Michonne to follow the flare — our regulars, thinking their group would be drawn to it; Aaron, for his own reasons — that was how they did it. Together.

CLEAN SLATE | Shortly thereafter, Rick, Michonne, Glenn and Aaron found the others, and we learned why Aaron had been so upset about the flare: It was a signal that his partner (in every way), Eric, was in trouble. Luckily, Maggie, Sasha and the rest had rescued him from what he called “roamers” and put a makeshift splint on his broken ankle. He’d even managed to save the license plate that he’d scored for Aaron (only for Aaron to have to admit that he’d not only lost all the other plates, he’d lost the car to boot!). Though Aaron sincerely thanked the gang for saving Eric and promised to repay them when they got to Alexandria — now he trusted them enough to reveal the location — Rick insisted on making him sleep apart from his boyfriend. At that, Glenn balked, pointing out that the guys were honest and unarmed, and one of them couldn’t even walk. They could be decent about this, he argued. They didn’t have to give up ALL of their humanity. And at last, Rick relented. The next day, on the road to Alexandria, Noah offered Aaron aspirin for the brutal rope burns his wrists had suffered. In turn, Aaron said that the community had a good surgeon who might be able to fix Noah’s limp. During a brief RV breakdown, Michonne encouraged Rick to let go of the fight. She knew that it was good — it had kept him and all of them alive for a long time. But, she added, “The fight… it turns on you.” Rick noted that, before Bob died, he had said pretty much the same thing. Nonetheless, Rick still snuck off to hide a gun in a blender among the trash outside a conveniently located abandoned shack. (In case he needed it later?) As the hour drew to a close, you could just see the tension rising off of him as they pulled up to the gates of the Alexandria Safe-Zone. When they’d arrived at the prison, he’d heard nothing, he’d told Michonne earlier. Same with Terminus. Here, however… here, he could hear kids playing. So, as scared as he was, he picked up Judith to go inside. “Even though you were wrong” about this place, Carol told him, “you’re still right.” Nice.

OK, your turn. What did you think of the episode? Would you have believed Aaron right away if you were Rick? Hit the comments!