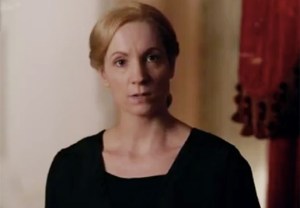 The investigation into Mr. Green’s murder took a sharp turn down WTF Avenue on Sunday’s Downton Abbey as a Bates was unexpectedly placed behind bars — but not the one you might have expected.

Is it possible? Could Anna really have pushed Mr. Green to his death? The witness to his murder certainly didn’t hesitate to pick her out of the line-up, but I remain unconvinced. Turning Anna into a killer seems like a shark over which even Downton wouldn’t dare to jump.

Still, things aren’t looking too great for her as we head into next week’s season finale. They’ll eat her alive in jail. 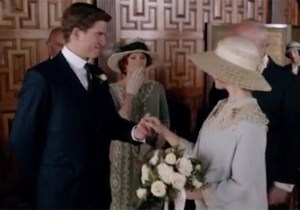 UNHOLY MATRIMONY | Rose and Atticus’ wedding, which managed to happen in spite of the couple’s respective in-laws’ best efforts, stole most of the episode’s focus — and for good reason. Not only did Rose’s mother frame Atticus by sending a prostitute to his room, but when that scheme blew up in her face, she announced her intentions to divorce Shrimpy, knowing full well that the D-word would force Atticus’ father’s hand. And her Plan B might have worked, had it not been for the intrusion of Atticus’ mother, who threatened to give her husband a real scandal should he decide to stop the wedding. (How amazing was Shrimpy’s “Down, you cat!” moment, by the way? I’m #TeamShrimpy for life. 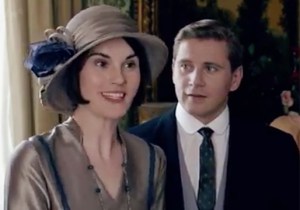 PLUS NONE | Speaking of wedding-related awkwardness, Mary was forced to fake a smile as she accepted an invitation to Tony and Maybe-It’s-Mabel Lane Fox’s nuptials. The worst part? With Tom (potentially) leaving for Boston — something neither Mary nor I am looking forward to in any way — she might have to go solo! That’s, like, Edith-level depressing right there. At least she got that nice pep talk from Carson: “He wasn’t good enough for you, my lady. Not by half.” (I’m not sure I agree, but whatever.)

INDECENT PROPOSAL | And Tom isn’t the only one who might be parting ways with the Abbey. The Dowager Countess got a real sexy proposition from her princely ex-boyfriend, who said he wants to “spend my final years” with her “as a friend… as a lover.” Despite her previous objections, Kuragin’s latest attempt appeared to penetrate (…) the D.C.’s icy exterior; could she really be considering leaving with him?

GET A CLUE | Often one of the last horses to cross the finish line, Robert used his keen observational skills this week to (finally!) figure out that Marigold must, in fact, be his granddaughter. He didn’t seem as huffy about it as I expected him to be, but it’s possible that Bricker-gate helped him realize he shouldn’t keep rushing to judgment. I think our angry little man might actually be growing up.

Odds and Ends:
* A new footman named Andy was introduced. I thought Thomas was going to make a move, but then he didn’t. So… nothing to see here, folks.
* Daisy’s getting real big for her britches, I’ll tell you what.
* I don’t want any more of this Molesley-Baxter romance, because it just makes me think about how weird Molesley probably is in bed. Don’t judge me; he’s like a real-life Mr. Bean.
* That whole subplot about Mrs. Patmore and the memorial (aka the perfect opportunities for bathroom breaks) also reached its conclusion this week.

Lords and ladies, do you think Anna killed Mr. Green? Should the D.C. take up Prince Kuragin on his offer? And was I crazy for expecting something to happen between Thomas and Andy? Drop all of your thoughts and theories in the comments section below.