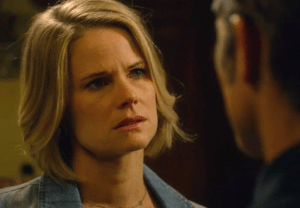 THE PERFORMANCE | As FX’s Kentucky-fried drama unspools its farewell run, steering Raylan and Boyd toward a final showdown, Ava Crowder is woefully caught in the middle — and this week, you deeply felt it via Carter’s performance.

As much as acting can be about words and how they are spoken, Carter demonstrated the power of a furled brow or pursed lips. Take the breakfast scene, where Ava’s face barely conceals high anxiety as she engages in what otherwise is a bucolic moment with Boyd. Seconds later, when Boyd slips the diamond back on her finger, Carter showed us a woman pained by the memory of the joyous original engagement was, seeing as now any future has a pall cast upon it by so many things, including her obligation as Raylan’s CI and the threat of death, if in fact Katherine is putting the pieces together.

Carter also made Ava’s growing desperation clear, whether haggling with Raylan over WITSEC options or leveraging her complicated past with Limehouse in the name of laying hands on a simple car.

With the final scene, opposite Timothy Olyphant, Carter crystallized Ava’s most basic want: to come out of this alive. Yet no reassurances seem able to soothe her, especially in the wake of Boyd reneging on the plan to leave Harlan. “There’s gotta be a place in Hell for a man who breaks a promise to a woman,” she lamented. Then, “You gonna take care of me, like you did after Bowman?” she asked Raylan. “The answer to my prayers?” Ava doubled down on that loaded callback to the pilot and surprised Raylan with a kiss — perhaps hoping it’ll seal the deal for her survival.

Cicely Tyson resoundingly entered the Emmy race for Guest Actress with her turn as the disapproving mother of How to Get Away With Murder‘s Annalise. While her intro to the Keating 5 was a crowd-pleaser (as she vividly defined her “VIP” status), it was a subsequent pair of scenes — first, admitting she’d known about young Anna Mae being molested under her roof, and then her confession to burning down said home (and abusive Uncle Clyde with it) — that blew our minds. As Ophelia brushed her child’s hair and calmly related her tale of revenge, Tyson reflected the remorse and even menace of she who helped form HTGAWM‘s flawed, fascinating protagonist.

the course of five seasons, Noel Fisher has become Shameless‘ surprise MVP, and this past Sunday’s episode displayed yet again how the actor has transformed Mickey from closeted thug to Ian’s loving partner. Reuniting with his boyfriend in a sweet embrace after Ian’s bipolar breakdown, Fisher displayed a tenderness and a depth of emotion that took our breath away. Mickey still bends the rules to make a buck, but thanks to Fisher’s revelatory performance, there’s no doubt that, unlike his criminal activities, his love for Ian is always pure and true.

HONORABLE MENTION | For years, The Middle‘s Eden Sher has eclipsed the sitcom trope of the

middle child haplessly vying for the parents’ favor, instead portraying a bright-eyed, relentless optimist. But this week, Sher took advantage of an out-of-character moment as Sue got down on her knees, crying to Mike to help end an unintentional engagement, conveying the character’s desperation without ever becoming untrue to who Sue is. Later, she superbly communicated the guilt behind Sue’s eyes, feeling awful as she did for breaking Darrin’s heart (though for all the right reasons). It was a growing moment for Sue, and a fantastic performance from The Middle’s unsung comedic marvel.