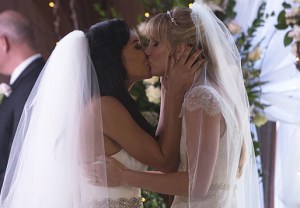 Brittany S. Pierce and Santana something Lopez finally walked down the aisle on Friday’s Glee — but they didn’t go it alone!

Thanks to a little 11th-hour persuasion, courtesy of Sue Sylvester and the brides, Kurt and Blaine agreed to do what “at least 52 percent of [America] will legally tolerate” and make it a double wedding. And despite the gang’s pre-wedding jitters — most of which came from Brittany, who insisted that she wear a spider on her dress for good luck — the ceremony went off without a hitch.

The real excitement, of course, was saved for the reception, which found the moms — including Gina Gershon, Jennifer Coolidge and Gloria Estefan — uniting on stage for one of the most exciting, or at least one of the most colorful and campy, performances all season. (Seriously, Showgirls‘ Cristal Connors and Legally Blonde‘s Paulette together at last? What a time to be alive!)

Elsewhere during the festivities… 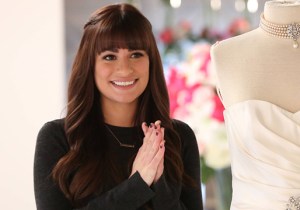 SAMCHEL’S SEAL OF APPROVAL | Despite being happy in her relationship with Sam, Rachel worried that being too affectionate with her new boo at the wedding would upset Finn’s mom, with whom she’d regrettably lost touch with since his death. The moment of truth arrived during the reception when Kurt invited all of the couples in attendance (“both official and unofficial”) to hit the dance floor, prompting a sweet nod from Finn’s mom, giving Rachel the OK to slow dance with her new man. 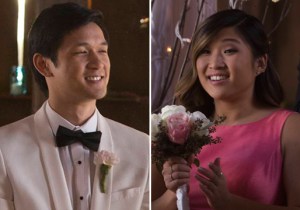 OH, TINA… | Hoping to make it a triple wedding — or at least secure nuptials of her own down the line — Tina revealed that she bought an engagement ring and planned to propose to Mike (even though, you know, they’re not even dating anymore). But her proposal, though beautifully delivered, didn’t exactly go according to plan. He gave her the whole “We have our lives ahead of us” and “There are a million other guys out there” routine, which I can’t say I disagree with. In fact, am I the only one who half-expected him to reveal that he realized he’s gay in college? (I mean, this is Tina we’re talking about.) At least she got to become Artie’s “back-up fiancée.” That’s kind of a decent consolation prize, right? … No? OK.

Did the big Glee wedding meet your expectations? Were you surprised to see Kurt and Blaine join Brittana? Are you glad Rachel got the OK to date Sam from Finn’s mom? Drop all your thoughts in the comments section below.