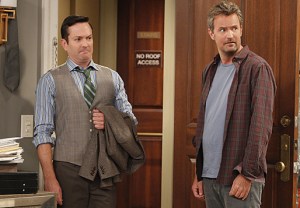 They say that a classic never dies. And this Thursday, CBS took that old adage for a test drive with its debut of The Odd Couple, a reboot of the ’70s series based on Neil Simon’s play.

In this updated version, Friends‘ Matthew Perry stars as slobby radio DJ Oscar Madison, who takes in his uptight friend, Felix Unger (Thomas Lennon, Reno 911!), after Felix’s wife throws him out of the house.

It isn’t long before Felix’s neat-freak habits get under Oscar’s skin — not to mention the neediness, passive-aggressive notes and foul dinner recipes (what’s the point of meatless meatballs, anyway?).

Still, even though Felix might wear his heart on his sleeve more than Oscar does, the latter roomie is also grappling with some love-life issues — more specifically, he’s trying (and failing) to ignore just how much he misses his ex-wife, Gaby. Since two lonely hearts are better than one, Oscar and Felix opt to give their new living situation a second chance.

Much of The Odd Couple‘s pilot episode pays homage to its source material — “It took me two days to figure out that F.U. is Felix Unger!” is one such line from the Broadway play — but Perry and Lennon seem to have fun with this modern-day retelling, despite the decades-old story at its core.

But did you enjoy watching The Odd Couple? Grade the series premiere in our poll below, then hit the comments to back up your choice!