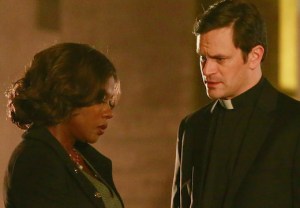 It’ll soon be Father’s Day — in court — on How to Get Away With Murder.

Tom Everett Scott (Southland, Beauty and the Beast) will appear in the first half of the ABC thriller’s two-hour finale (Feb. 26, 9/8c) as a priest accused of killing a fellow man of the cloth, TVLine has learned exclusively.

Viola Davis’ dynamic defense attorney Annalise Keating will take the pastor’s case despite her attitude toward religion — We all remember her recent zinger “Prayers are for the weak; I’ll stick to beating your ass in court,” yes? — and her current workload of trying to (Spoiler Alert!) keep herself and her students out of jail in the death and disposal of her husband Sam.

ABC’s official descriptions for the back-to-back finale episodes are as follows:

“The Night Lila Died” (aka Hour One): “In flashbacks, we start to piece together what really happened the night of Lila’s murder. In present day, Annalise takes on a priest who is accused of murdering another priest. Meanwhile, Connor and Oliver take things to a new level in their relationship and Wes and Rebecca continue to grow suspicious of each other.”

“It’s All My Fault” (aka Hour Two): “Wes, Connor, Michaela and Laurel may have dug themselves in too deep a hole for Annalise to save them and the shocking truth about Lila’s murder is finally revealed.”

Excited about Scott’s addition to the HTGAWM finale? Worried Annalise might be a little too distracted to help him out of his pickle? Sound off in the comments!