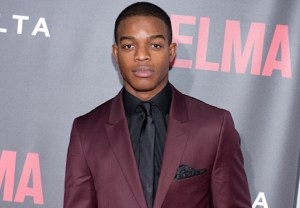 Produced by an angel — and playing one, too.

That sums up the current status of Selma star Stephan James, who’s been cast in a major role as a neophyte guardian angel in the NBC pilot Unveiled — from husband-wife producing team Mark Burnett (The Voice, The Bible) and Roma Downey (The Bible, The Dovekeepers), Deadline reports.

Downey, of course, also starred as a heavenly creature from 1994 to 2003 in the family hit Touched by an Angel.

James, who’ll also be seen as Olympian Jesse Owens in the upcoming big-screen drama Race and is known to TV viewers for roles in The L.A. Complex and Degrassi: The Next Generation, will play Unveiled‘s Daniel Shepard, a rookie who is “unfamiliar with human suffering,” but “sometimes bends the rules for the greater good.” Daniel is one of an ensemble of celestial helpers who swoop in and try to restore faith in the lives of people in desperate situations.

Does James’ part in Unveiled make you say “hallelujah” — or are you not yet a believer? Sound off in the comments!