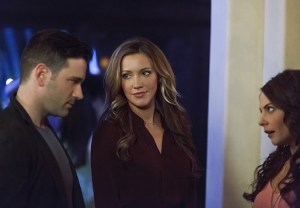 I did not want this episode to end.

HOME | In flashbacks, Oliver was charged by Waller with infiltrating Queen Consolidated — his family’s own company — without revealing himself, to get the skinny on a business associate who’s in the market for the Omega bioweapon component. While in Starling City, Oliver spies Thea at his and their father’s grave… to meet with a drug dealer. Tommy crashes the buy, then warns Thea not to attend his “21 and over” birthday party.

Later, Oliver sneaks into QC, where on the computer network he sees files his father labeled “For Oliver” and “For Thea.” He downloads them onto a thumbdrive and — after witnessing a young blonde staffer in glasses admire his photo on a desk (“You’re cute”) — makes tracks for Tommy’s party, where we spy Diggle and his brother Andy (Bones‘ Eugene Byrd) in bodyguard mode. There, Oliver spies a bit on Laurel, and then he tails Thea’s dealer and ultimately snaps the punk’s neck/pitches him over a railing.

In the aftermath of the dead body being found at billionaire Tommy’s party, alcoholic SCPD Detective Lance rails at daughter Laurel for apparently still having a thing for “rich bad boys,” something he thinks her dead sister Sara’s ill-fated boat trip with Oliver Queen would have “cured.” This is an ongoing theme on their side of the flashbacks, as Quentin thinks Laurel is copping out on her mission to “help people” by moving to San Francisco for a job at a tony law firm. By episode’s end, Laurel is seen leaving CNRI (gosh, remember that?) and agreeing to “just dinner” with Tommy. (And we all know how that goes.)

Oliver was led away from the crime scene by a gun-toting Maseo, who dissed his pal’s choice of disguise. “I pulled the hoodie down to cover my face,” Oliver argues. Maseo retorts: “That disguise wouldn’t work even if you smeared grease point on your face.” Noted.

Later, Oliver uses a tablet at the Queen manse to play the video file on the thumbdrive, in which Robert admits to “fail[ing] the city” and forming alliances with terrible people whose names he has listed in a book. “You can right my wrongs,” Robert says. “You can save this city.” (Hmm, good motto.) Coupling that sentiment with what Maseo advised him earlier, about stopping the bioweapon from taking innocent lives, Oliver shows up at China White’s auction in time to save Maseo’s bacon and then secure the Omega. Alas, Oliver’s servitude to A.R.G.U.S. is not over. General Matthew Shrieve (played by Marc Singer) arrives to say that Oliver must first be debriefed in Hong Kong, and from there he can write his own ticket. 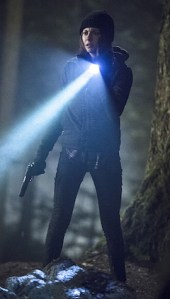 training sessions with Thea on Lian Yu, Oliver decides to pay Slade Wilson a visit at the subterranean A.R.G.U.S. prison… only to find that his mortal enemy has escaped, set free by Malcolm in the name of forcing Oliver to regain that killer instinct. In their first scuffle, Slade ends up gaining the upper hand, and then locks Oliver and Thea in his cell. During their umpteenth discussion about Oliver dodging Thea’s questions about Sara’s death, Oliver realizes that his sis being a “tiny” thing might get them out of their jam. One arm dislocation later, Thea is able to reach through the bars and release the lock. Then, whilst on the hunt for Slade, Oliver finally comes clean about Sara’s death, how Malcolm drugged someone to kill Sara without even realizing what they were doing: “You killed Sara.”

Thea launches into some self-flagellation but gets interrupted by Slade, who sneaks up and pulls a gun on her. Thea wrests the weapon free, and then she and Ollie take turns whaling on the baddie, until at one point Thea has the option of putting a bullet in Slade, execution-style. Lest she turn into the killer Malcolm wants her to be, she only gives Slade a flesh wound before they return him to the prison. 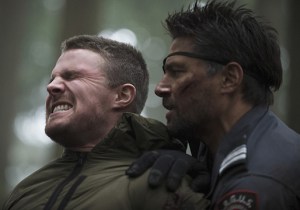 Still, Slade points out to Oliver that Thea is “lost,” “touched by darkness” courtesy of Malcolm. His father, his mother, his sister… maybe that “girl with the glasses”…. Slade wonders how many loved ones can Oliver lose before he ceases being Oliver Queen?

HOME AGAIN | Returning to Starling City, Oliver advises Thea not to reveal the Sara story to Laurel. Malcolm, meanwhile, is none to happy that Thea knows — but then again, Thea isn’t his biggest fan anymore. In the name of besting Ra’s, she says through gritted teeth, “I will be your student, your partner, your solider… but never again will I be your daughter.”

Speaking of chilly father/daughter relations: We see Lance at Sara’s gravesite, clutching an unopened bottle of booze, when Laurel approaches. He wonders how he’ll ever tell Dinah about this. Awkward. Mom already knows, Laurel admits.  When Lance taunts his daughter about being late for her “shift” as Black Canary, she reminds him of how he years ago encouraged her to “help people,” adding, “My life was headed towards that mask!” But what hurts Lance most is that with her lies she has broken their trust, their bond, the one thing they always had as their family endured heartache: “I don’t know how you could do that to us,” he moans. Laurel suggests he put the bottle down and hit a meeting — and he agrees. Just not the same meeting as her.

What did you think of “The Return”?