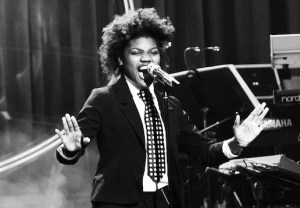 For American Idol addicts, the Top 24 announcement episode is akin to being a kid on Christmas morning.

Over the last six weeks, we’ve flipped through our J.C. Penney and Sears catalogs — hey, I grew up in the ’70s; that was as close to perusing the Internet as it got! — and picked out what we wanted in our voting rounds: “Ooooh, I gotta have one Sarina-Joi Crowe, a Clark Beckham and definitely the Savion Wright that Santa accidentally left in his workshop last year!”

But executive producer Per Blankens is not a jolly, bearded fella in a red coat — and he has not built his life around wish fulfillment for good little boys and girls.

Which, of course, means there will be tears (or J.Lo’s double dose of Visine), “Say WHAT Now” exclamations and even a few moments where some of us are ready to pick up our brickbats and torches and storm The House That Has Not Yet Acknowledged Alexis Grace’s New Single.

Season 14’s “Green Mile” — built around the Top 48’s performances at a live showcase at L.A.’s House of Blues — was not as infuriating as it could’ve been. J.Lo got the sads, but didn’t go full “I shoulda been Oscar-nominated for Out of Sight” emotional as she gave some kids the bad news. We got plenty of actual singing for a one-hour show. And the cruelty of seasons past was reserved for a single, solitary singer this year — though whether that’s good or bad, I leave for you to decide.

On that note, let me break down who advanced and who got axed — along with letter grades that, if I’m being honest, are probably unfair considering we mostly got to hear carefully edited snippets of performances rather than whole enchiladas.

Eliminated With Context
Cody Fry — “Viva La Vida” — Grade: B (I haven’t been his biggest fan, but you can’t tell me Daniel and Michael are better or more charismatic performers. No you cannot.)

So the judges shockingly eliminated Maddie Walker based on her very solid House of Blues showcase — and were all set to advance the heretofore unseen Rachel Hallack. That is, until Maddie walked in with a personal magnetism and hair situation that made Keith, Harry and J.Lo say “Gurrrrrllll.” This resulted in a sing-off — in which Rachel was told the spot that had been allotted for her was now essentially up for grabs. I don’t even care to discuss it beyond the fact that BOTH OF THESE CHICAS SHOULD’VE BEEN IN THE TOP 24. (Come on, come on, come on… Shannon’s listless Joplin impression should’ve been an automatic ouster, no?) Nevertheless, my grades are as follows…

On that note, I turn things over to you: Who did you love from the House of Blues showcase? Who got robbed? Sound off below — and check back next Monday as Melinda Doolittle and I rant and rave over the Top 24 on an all-new installment of Reality Check!