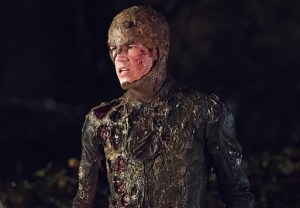 This week on The CW’s The Flash, as Ronnie and Professor Stein looked forward to a future apart, Barry dwelled on the past — and how he might be able to change it.

Having survived and been separated by last week’s blast, Ronnie and Stein are at first a bit perturbed with each other — seems Ronnie wasnt a big fan of having Stein at the wheel with the flying and all. But soon enough they are happily consumed by loving reunions, with Caitlin and Clarissa, respectively.

Meanwhile, Joe brings Barry to his old house — that flirty divorcee who now owns it sure is great about letting a cop have the run of the place! — to treat him to Cisco’s 3D slideshow. Joe then drops the bomb that the blood spatter they recovered is a match for Barry. An adult Barry. Later, Joe apologizes for adding this burden to Barry’s life, while Barry deflects the notion that Wells played a role in his mother’s murder.

At S.T.A.R. Labs, Barry picks Dr. Wells’ brain about the idea of time travel, and Wells says it’s “possible but problematic” and “fraught with pitfalls,” for the assorted reasons we have seen in films such as Terminator and Back to the Future.  Barry’s consult with Stein is a bit more optimistic, as the professor views the space-time continuum as a “highway” with on- and off-ramps. When Barry shares the story about his presence in the past, Stein theorizes that if the speedster moved fast enough, he could bust a hole in the continuum. The downside, Barry notes, is that he apparently is destined to fail, having lost that long-ago fight with his mother’s murderer.

As Stein and Ronnie begin to realize that they still share a connection due to synched brainwaves and what not, General Eiling is determined to track down Firestorm. His first stop is Jitters, where his team tries to tranq Ronnie, but The Flash comes to the rescue — though along the way he gets porcupined by a nifty “bomb” Eiling brought with him. Eiling then meets with Wells, revealing that he knows (via Plastique) that Barry Allen is The Flash. Presumably to buy the general’s silence (?), Wells drugs and turns Stein over to him — only to have The Flash eventually free the professor, after Stein and Ronnie find clever ways to communicate with each other.

Outside Eiling’s military compound, Barry gets waylaid by a blast of weaponized phosphorus, forcing him to sit (or, OK, run, a lot) on the sidelines as Ronnie and Stein peacefully re-merge, 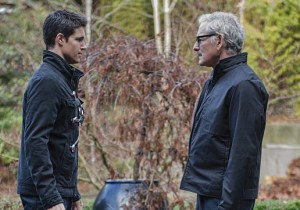 forming a far more stable Firestorm. They do a good job of blowing up baddies until Eiling uncorks another nifty bomb, one that neutralizes their ions (or something). After The Flash saves Stein and Ronnie from the general, the two halves of Firestorm decide to hide away in Pittsburgh for the time being, as they research their unique situation. The men say bittersweet goodbyes to their ladies, then re-merge and blast off, while Barry announces to Joe his resolve to travel to the past and save his mom.

* Iris took issue with mentor Mason Bridge’s investigation into S.T.A.R. Labs, until she caught Caitlin in a lie about her “cousin Sam” from Coast City — or was it Midway City? Comparing pics of “Sam” and one from her Flash blog, she tells Mason she has reason to believe that “Burning Man” once worked at S.T.A.R. Labs.

*  Lest we think Wells is completely in Eiling’s pocket, the coda shows Reverse-Flash grabbing the general and depositing him in the sewers. When the man in yellow removes his mask, Eiling is agog to discover that his frenemy is one of the meta-humans. Worse, Wells says, is that meta-humans look out for their own — and on that cue, we hear Grodd growl in the distance. “Oh God…,” Eiling frets. “Not God — Grodd!” the beast roars, before dragging the general away like a rag doll, seemingly anxious to deliver payback for all those stun baton sessions.

NOTABLE QUOTABLES
* “Excuse me, are we all planning to sing ‘Kumbaya’ next?”
* “Alive? We were living under a bridge, eating garbage.”
* “Dude, that was like Week 3!”
* “I’m still inside Ronald.” “There’s gotta be a better way to say that.”

What did you think of this week’s The Flash? Looks like Iris is poised to get into the thick of it soon, eh?