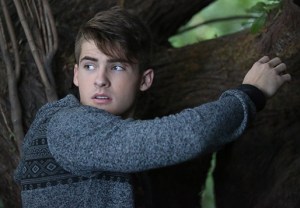 Among the strangest reveals from Tuesday’s Pretty Little Liars: Mike and Mona are apparently the Angelina Jolie and Billy Bob Thornton of Rosewood.

After Aria’s little brother flipped out — and flipped a table, Teresa Giudice-style — she put Andrew on his trail, eventually discovering that Mike was hiding a vial of Mona’s blood in a tree.

And things didn’t get any less weird when she confronted him about it; Mona apparently plotted to frame Alison for her murder, then gave a vial of her blood to Mike as a promise that she’d come back someday. But weeks later, even Mike is willing to admit that Mona’s plan failed, and that someone else killed her for real.

Or did they? (No, seriously. I don’t care how many times we’re told that Mona is dead. A part of me will always wonder…) 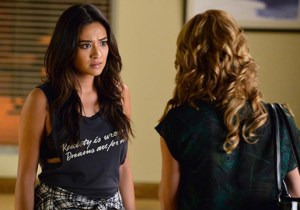 LIARS IN TIARAS | Meanwhile, Hanna spent the hour learning what we all knew deep down inside: She’s just too angry to be a beauty queen. After hiring a coach and having Emily choreograph a “Bang Bang”-in’ dance routine, Hanna was told that she’s simply not pageant material. Miz Fields, on the other hand, apparently has exactly what it takes so succeed in the pageant world, so she decided to enter the competition and win the tuition money for Hanna. Of course, entering the contest will also give Emily a much-needed break from all the drama in her life; she finally met Talia’s husband Eric, who’s under the impression that she and Emily were merely a one-time thing. (And is anyone else getting crazy vibes from Talia? Like, single-white-female crazy? I’m concerned.)

OUTLAWS OF LOVE | The only thing more uncertain than Spencer’s future as an international art thief is her future as Toby’s girlfriend. After helping Johnny break into a local art gallery to steal back their little vandalism project — it was submitted by an “A”nonymous donor — the Hastings’ house guest was promptly arrested by Officer Toby. Not only did this create major friction between Spencer and her boyfriend, but it also ended Jonny’s stay in their barn. Oh well, at least Spencer will have that kiss to remember him by! (Seriously, though, why did Spencer think Toby would let Jonny go? Doesn’t she know what breaking and entering, not to mention stealing, is? And she’s supposed to be the smart one!)

PLL fans, are you bracing for a Spoby split? Will Emily’s plan to help Hanna backfire? And, most importantly, do you think Mona could still be alive? Drop a comment with your thoughts and theories below.