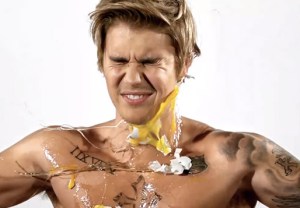 Justin Bieber is getting an egg-cellent taste of his own foolishness.

In a new teaser for the pop star’s Comedy Central Roast (airing March 30), a shirtless Bieber gets pelted with eggs, while a tag declares, “Come and get it.” (A nod to ex Selena Gomez’ tune of the same name?)

Press PLAY to watch the promo, then hit the comments to let us know if you’ll be tuning in.

* Game of Thrones fans, brace yourselves: In Season 5 of the HBO series, “People are going to die who don’t die in the books, so even the book readers will be unhappy,” author George R.R. Martin told Showbiz 411.

* ABC’s Modern Family on Feb. 25 will air an (extremely funny and highly clever, we must note) episode that is presented almost entirely from the point of view of Dunphy/Pritchett family laptop cameras, iPhones and iPads.

* Twin brothers John and Edward Grimes (aka “Jedward” of The UK’s X Factor) will make their acting debut in Sharknado 3.

Welcome to Orlando the Fun is just about to start! Filming Sharknado 3! Let the Games Begin! We are here get ready!

* Daily Show correspondent Jessica Williams will not be taking over for host Jon Stewart. After Williams emerged as a popular pick among fans, she took to Twitter to explain why she’s “not right” for the job.

Fact 1: I'm not hosting. Thank you but I am extremely under-qualified for the job!

At this age (25) if something happens politically that I don't agree with, I need to go to my room & like not come out for, like, 7 days.

* TBS’ Conan recently traveled to Havana, Cuba, for its March 4 episode, making it the first American late night show to film in the country since the U.S. embargo began in 1962, our sister site Deadline reports.

* USA Network will air Glory, with a special intro from star Andre Braugher, on Feb. 21 at 7/6c as part of its Characters Unite film series.