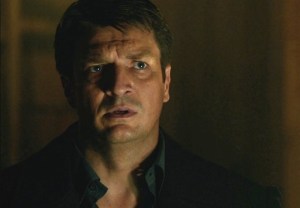 The following contains spoilers from the conclusion of Castle‘s two-parter.

This week on ABC’s Castle, Rick — in his heated pursuit of any leads on Kate’s abduction — got slapped with assault charges after roughing up the man proclaiming himself to be Michael Boudreau. Then, acting on Gates’ counsel, Rick got inside his adversary’s head and decided to “bring the game to him.”

To that end, Rick went “lone wolf” and infiltrated Jerry Tyson’s remote lair, only to get nabbed by his own prey. Yet that was Rick’s plan all along — to let 3XK lure him there, so that he could find Kate. Because Castle was in fact not alone but accompanied by Esposito (outside with a sniper rifle, which he put to use in taking down Tyson) and Ryan. Beckett meanwhile freed herself from being strapped down for “surgery” and turned Dr. Nieman’s scalpel against her, leaving Tyson’s girlfriend dead in a pool of blood. In the aftermath, Castle got his job back at the 12th, by way of 1,000 hours of community service to work off those assault charges.

TVLINE | Was there any debate about ending the 3XK mythology?
Not really. Again, part of the desire was to have real scenes and real conflict that put our characters directly in opposition with Tyson and Kelly Nieman. We felt that the satisfying consequence of that was that this would be the end, that when you have that kind of confrontation where a gauntlet is thrown down — in Part 1, Tyson and Nieman walk out of the precinct free and clear while Beckett gets grabbed — there has to be an answer to that that’s going to be satisfying to the audience. We have done a Tyson-related episode every season [since the character’s debut], and this felt like a good time to bring it to a close.

One of the other things we wanted to get out of the two-parter, one of the reasons why we ultimately wanted to put Jerry Tyson to bed once and for all, is that we wanted to really give Castle a way to earn his way back into the 12th precinct. He did some things that were worthy of him being dismissed, and in order to redeem himself we felt like he had to do something extraordinary. This let him do that, and with some credibility. It wasn’t just, “Hey, we like you, we want to bring you back.” He had to earn his stripes, especially in Gates’ eyes, and he did.

TVLINE | You’d know better than I, but this felt like one of the first times that Beckett has been in jeopardy and Castle got to save the day. I know he had some help, but he kind of orchestrated this rescue mission.
There may be some other examples 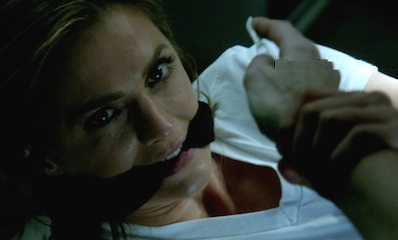 where she’d been in jeopardy in a less dire way…. But from our standpoint, we also wanted Beckett to have agency over her own fate here, in that she doesn’t really depend on him in this particular case to come to her rescue. He comes in just as she’s finished [killing Nieman]. We felt like both of them acted up to their level on both sides of the story.

TVLINE | Did you think about maybe going further and actually pulling off a Beckett look-alike, as last season’s “Disciple” did with Lanie and Espo?
We did sort of toy with that, when Beckett’s double [the druggie in a wig] is shot. But we didn’t go as far as the surgical reconstruction. But obviously that was on Tyson and Nieman’s agenda, had they been left to their own devices.

TVLINE | The soap opera-raised kid in me hoped that you would leave Castle with a fake Kate and we don’t realize it until the season finale.
Yeah, that would be a tough one! [Laughs]

TVLINE | In your mind, what was the significance of the very final scene, in bed?
It’s really about them coming together and sharing this experience. Part of it is also acknowledging what Castle went through at the beginning of the season, what Beckett went through not knowing where he was…. That’s also going to figure in a bit later on in the season, when we get into a more serious look at that missing time.

TVLINE | OK, because you previously told me the two-parter would “revisit” Rick’s vanishing, but I guess you meant only via dialogue. When do you plan to actually dive back into that unsolved mystery?
We touched on the missing time here more in terms of the feeling it was bringing out in the characters — specifically the first time Castle is looking at the tape Beckett made, he’s kind of experiencing what she experienced, except probably a worse version, because he knows she’s in the clutches of Jerry Tyson. But it’s a way in which he can kind of understand the helplessness and difficulty that she went through when he was [gone], and that’s going to stick with him a bit. That will be explored in a greater depth when we get to Episode 20.

TVLINE | I was thinking that with 3XK gone, what ongoing mythology is left on the series?
There’s the vanishing…. And there are some other things that we’re going to be exploring later in the season, when we deal with some Beckett mythology.

TVLINE | Something with Beckett we’ve touched on before, or something new?
It’s a little too soon to talk about it. It’s still in the incubation stage. 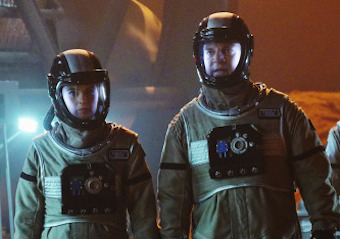 “The Wrong Stuff” episode looks considerably lighter in tone — but that’s what you do, right?
Yeah, a lot of times we’ll go a bit more serious in these two-parters, and then we’ll come out of it very deliberately with a lighter episode. In this case, a murder on Mars has a lot of classic Castle fun to it. We think the fans are going to dig that episode.

TVLINE | I almost hesitated sharing those episodic photos with readers because you can’t unsee them. They certainly suggest it’s one of the more “far out” episodes.
It definitely is, and there’s a lot of fun Castle/Beckett interaction in this world, talking about the idea of whether either one of them would want to go on a Mars expedition — and there are some surprising answers that come out of that question! It’s one of those episodes that also kind of feeds a Castle fantasy about being a space traveler, so it’s a good “palette cleanser” after the two-parter.