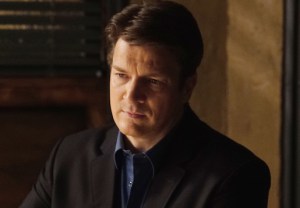 And even if the guy seen walking out of the 12th precinct holding hands with Dr. Nieman is in fact mildish-mannered Michael Boudreau, cut to look like Tyson (and thus taunt/haunt Rick and Kate), you’ve got the making for a nail-bitiing conclusion, now that Beckett has been KO’d and carted off to Heaven-knows-where by God-knows-whom.

“We’ve always felt like, since Michael Mosley’s appearance on the scene back in Season 3, that we had a very interesting character that we were dealing with,” Castle showrunner David Amann says of revisiting the 3XK storyline. “We’ve been able to touch on him a couple times, once every season directly or indirectly, and last season there was the introduction of Kelly Nieman who seemed affiliated with Tyson in some way. So we felt like it was a good time to dig deeper into who these characters were and put them in direct conflict with Castle and Beckett.”

“In previous episodes, they both made a big impression but they’ve sort of been at the periphery of the story, lurking in the shadows,” Amann notes. Here, “We wanted to drag them into the light and let them have it out with our lead characters.”

And have it out they will, for as Rick races to find Kate, he will leave no stone unturned, no menacing person of interest not lobbed across a room. Yes, in Part 2, you will see Castle at perhaps his most intense, his most physical. “In past episodes, including the [Season 5] two-parter when Alexis was abducted, you saw a similar reaction from him,” Amann says. “When somebody he loves is in danger, he’s going to pull out all the stops — and that’s definitely what he does here.”

Of note during Part 2 is that when Rick (briefly) allows himself a cooler head amidst the heightened frenzy, he will receive an invaluable bit of advice from one of his biggest frenemies. “His relationship with Gates (Penny Johnson Jerald) has evolved, at least during this episode, because she’s trying to counsel Castle and help him through this very difficult situation, where Beckett is gone and probably in very, very dire straits,” Amann previews. “They have a bit of a coming together, as she tries to help him figure out what to do next.”

As one can imagine, as Part 2 builds to a thrilling climax involving two separate set pieces, Amann promises “a couple” of twists, including a final, perspective-altering reveal that, he says, “is the biggest of the bunch.”