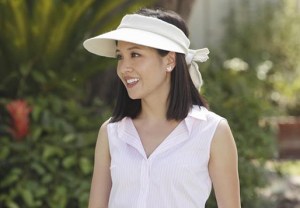 THE SHOW | Fresh Off the Boat

THE EPISODE | “The Shunning”

THE PERFORMANCE | Fresh Off the Boat’s sassy matriarch Jessica Huang sees the world a bit differently than most.

She prefers the Black Friday-esque hustle and bustle of Taiwanese markets to the quiet, fluorescent-lit grocery stores of Orlando, Fla. She’d rather enjoy a heated game of poker with her Washington, D.C. girlfriends than gossip with suburban Rollerblade moms.

And when it comes to being optimistic about her family’s recent move to the Sunshine State, that’s something Jessica leaves to her glass-half-full husband, Louis.

It would be easy for a character like Jessica to remain one-dimensional. But Constance Wu has managed to make her alter ego relatable, particularly in Tuesday’s first half-hour, which found Jessica suffering through a neighborhood block party for the Daytona 500 race.

As always, Wu’s deadpan delivery on even the simplest lines — “You know what gives me nightmares? Our bank account. Stephen King should publish my checkbook.” — communicated the sheer dissatisfaction Jessica has with her family’s new lifestyle.

But Wu shined brightest when she allowed Jessica to drop her no-nonsense demeanor and admit that she just wanted to make a friend. Even though Jessica momentarily got caught up in the gossip surrounding neighborhood resident Honey, Wu brought her character back down to Earth with a sweet, earnest smile and the humble realization that Honey was indeed eating Jessica’s food at the block party (and not just out of politeness).

The cherry on top of Wu’s multi-faceted performance, of course, was her lovely (and technically proficient!) karaoke performance of “I Will Always Love You,” dedicated to her new pal. Even though Wu shifted gears again mid-song — “This is not a duet,” Jessica quipped to Honey, who tried to take on the second chorus — Wu only needed a few seconds to introduce an endearing truth about her character: that she just wants to be liked.

of April’s faith in a just God, her prayers went unanswered in this week’s Grey’s Anatomy, paving the way for Sarah Drew to deliver a powerful and ultimately — miraculously — uplifting tour de force. At first, she channeled the mother-to-be’s horror at realizing that — even inside her body — the disease from which her baby suffered could be breaking his bones. Next, Drew segued from playing Kepner’s optimism to releasing her rage. “If this is a test,” she wailed, “I fail.” Except that in the end, she didn’t fail, she rose to the occasion, beliefs intact. Reassuring a woman who’d just lost her fiancé that she was indeed resilient enough to carry on, the doctor gave husband Jackson an “I get it now” smile that let him — and us — know they’d be okay. So, for taking us on this emotional roller-coaster ride, can the actress get an amen?

HONORABLE MENTION | For the patients at Red Band Society’s Ocean Park Hospital, illness isn’t a taboo conversation topic. Unless, of course, Ciara Bravo’s Emma is asked to confront her anorexia — a situation which, for most of the Fox dramedy’s freshman season, caused the anxious teenager to break down or shut down, both physically and emotionally. Fortunately, for both the character and invested viewers, Emma was able to confront her eating disorder (and the tenuous relationship with her mother that only made things worse) in Saturday’s series finale. Though Bravo did master Emma’s tearful scenes in family therapy, the highlights of her performance were the quietest moments. As Emma found herself unable to lean back into her mom’s arms — uttering a shy, “I can’t” as she failed to complete the trust fall — Bravo subtly revealed just how broken her character truly was, making it all the more satisfying for us when Emma began to put herself back together.

HONORABLE MENTION | Early on in this week’s episode of The Walking Dead, Tyreese revealed that, as a kid, his father always made him listen to disturbing newscasts on the radio and “called that payin’ the high cost of livin’.” And we were sure that the gentle giant was still up to the task. Who’s stronger than Tyreese, right? But after the sensitive soul was bitten by a walker — and visited by a few ill-fated figures from his recent past — portrayer Chad L. Coleman showed us exactly how excruciating it was for his alter ego to be a good man in a world gone bad. So when, rather than try to hang on, he said, “Turn it off,” we didn’t blame him. Hard as it was to say goodbye to the character, Coleman’s heartbreaking performance made us see why we had to let him go.